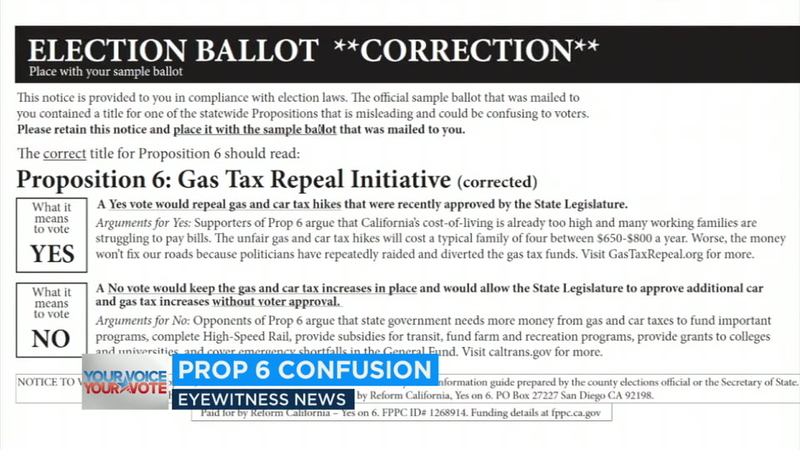 LOS ANGELES (KABC) -- Election officials and political advocates are warning voters about misleading robocalls and mailers that could cause some confusion in the November election.

Proposition 6 seeks to repeal the gas tax and vehicle fees enacted by the Legislature last year to help pay for road and bridge repairs.

The yes and no campaigns on the initiative are battling it out to sway likely voters in the Nov. 6 election. Their arguments are now centering over the language on the ballot and the tactics supporters are using to promote the measure.

Robocalls and mailers are going out now from supporters of Prop. 6 informing voters of an "error" on the ballot and an "election ballot correction."

They say they sent it out because they believe the language on the ballot isn't clear enough.

RELATED: A look at all the measures on California's November 2018 ballot

"We sent out this mailer to make sure everyone in California knows Prop. 6 is the gas tax repeal," said Dave McCulloch, a supporter of Prop. 6.

He says that won't be apparent to voters on the ballots. The language drafted by the state attorney general's office, he says, isn't specific enough. It says simply that "Prop. 6 eliminates certain road repair and transportation funding (and) requires certain fuel taxes and vehicle fees be approved by the electorate."

"When they get to their ballot on election day, they're not going to see 'Repeal the gas tax,'" said Thad Kousser, a University of California San Diego political scientist. "They're going to see a proposal written in legal language that says exactly what this bill does, which is it changes transportation fees and cuts funding for things."

The mailer sent in response to the ballot language includes disclosures that it's not official and that Reform California paid for it.

"It's made to look like a registrar of voters information piece, so it's made to look official, and it's misleading," said Catherine Hill with the No on Prop. 6 campaign.

The No on Prop. 6 campaign called it a disgraceful attempt to deceive voters, saying in part: "The more voters know about the damage Prop. 6 does to our roads and bridges, the more they will reject these fraudulent tactics by a desperate campaign that is willing to say or do anything to distract from the real issue."

According to the latest poll by the Public Policy Institute of California, just a slim majority of California's likely voters oppose Prop. 6.

The LA County registrar's office is warning voters to be aware of misleading claims that can cause confusion during election season.

County Registrar Dean Logan tweeted: "#VOTERALERT -- There is a robo call circulating that falsely claims there is an error in the Sample Ballot. The Sample Ballot includes ballot titles prepared by the Attorney General. Registrars of Voters do not alter ballot titles. The robo call was paid for by a campaign."