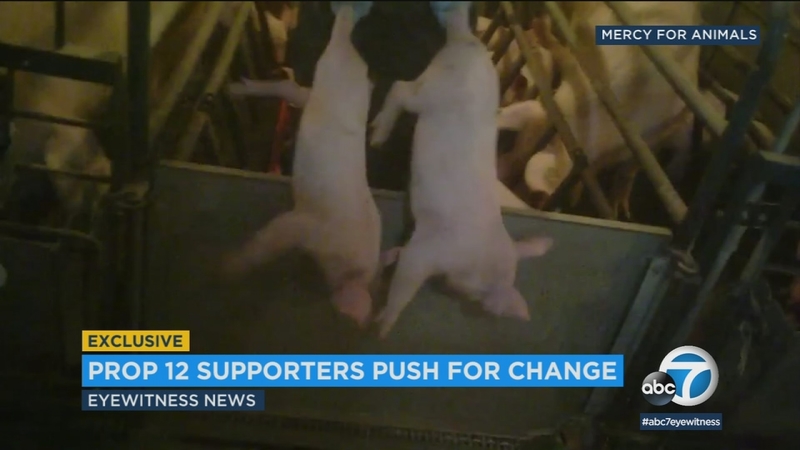 CA's prop 12 looking to change meat industry in other states

LOS ANGELES (KABC) -- Proposition 12 is looking to change how California gets its meat and prevent the abuse of farm animals in other states.

In footage given exclusively to Eyewitness News by animal welfare organization Mercy For Animals, it shows the abuse of baby and adult pigs at a Kentucky farm. The video was captured during an undercover investigation.

In it, baby pigs are killed after being repeatedly slammed into a concrete floor. Those who survive spend adulthood in a crammed cage where they are unable to turn around.

"These cages are considered so patently cruel they've been banned in California," said Matt Rice, president of Mercy For Animals.

In the November election, California voters will decide on 11 propositions. Here's everything you need to know about Prop 12. (Courtesy of CALmatters.org)

Proposition 2, which was passed in California in 2008, banned those cages - known as gestation crates - in the state. But meat shipped to California from other states does not have to adhere to the same strict standards.

But for this coming election, Prop 12 is looking to change that. It's also known as the Prevention of Cruelty to Farmed Animals Act.

"This proposition would close that loophole and require that all of these animal products - if they were to be sold to California - would meet California's strict animal welfare laws," Rice said.

While the meat industry is an obvious opponent of the law, a surprising group has also spoken out against it - PETA.

The organization said it cannot support the prop largely because it ignores the welfare of chickens.

"All it does is take hens out of cages and puts them into dark, overcrowded, feces- and urine-ridden warehouses, where they have no more than just a square foot of space," said Lisa Lange, senior vice president of PETA.

Rice said despite PETA's lack of support, the prop is important.

"I can't speak for PETA, but this is an important law that would help protect millions of animals around the country from some of the worst types of factory-farm cruelty," he said.