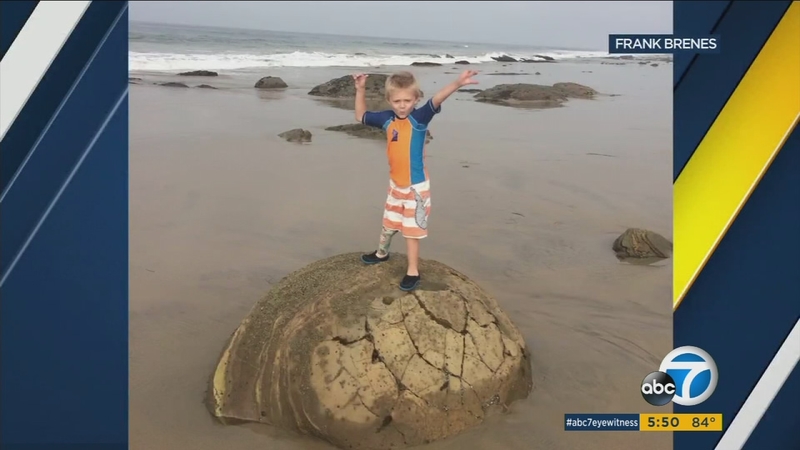 RANCHO SANTA MARGARITA, Calif. (KABC) -- Liam Brenes practices karate kicks outside his home in Rancho Santa Margarita - although doing all the moves is tough for the 4-year-old without his prosthetic leg.

"It's upsetting. It makes me sad someone would do that," said his mother Amanda McFarland.

The 4-year-old was visiting Crystal Cove State Beach in Orange County Sunday morning with his father Frank, his two older brothers and other family members. It was his first trip ever to the beach.

His father had his son wear an old prosthetic that he had outgrown while he left his new one on the beach with other belongings to protect it from salt water.

"We were in the water for 2 hours and came back and everything was gone," recalled Liam. "They stole my leg."

Liam had his right leg amputated just below the knee when he was 1 due to a rare condition that left him without a fibula, the smaller bone between the knee and ankle.

Liam's father searched garbage cans and looked around bushes at Crystal Cove, hoping the person who stole the leg just dumped it nearby.

"It's just heartless," McFarland said. "It's a child's leg. He needs it to be able to get around and function normally."

His old prosthetic is now three inches too short, although he tries to wear it.

His mother says insurance covers part of the cost, but a new prosthetic could cost a few thousand out of pocket. She says they'll also have to wait several weeks for it to be made and fitted.

In the meantime, his mother must carry him around, or he rides in a stroller.

Liam's message to the person responsible: "Give it back!"

"He's just started karate, he's very excited about that," McFarland said. "I don't know if he's going to be able to do that. So just bring it back."

His mother said no questions will be asked if the suspect returns the leg.