More than 900 arrested after looting, fires sweep SoCal amid protests over death of George Floyd

Officers with the Los Angeles Police Department were seen escorting a group of people were arrested into jail on Sunday.
KABC 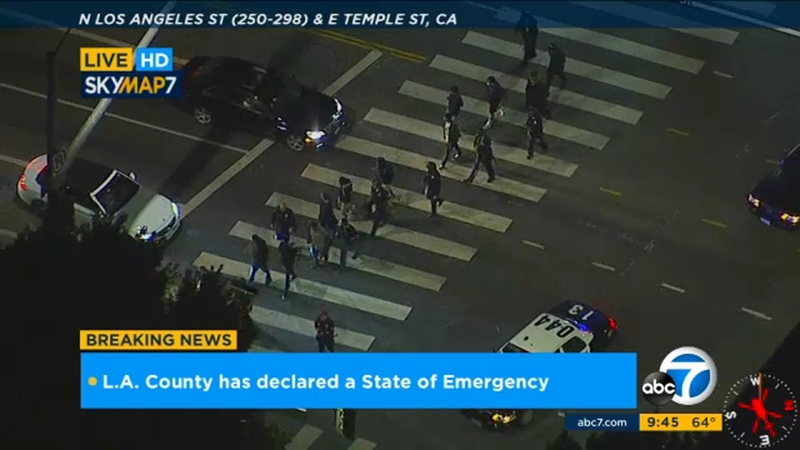 LOS ANGELES (KABC) -- More than 900 people were arrested amid a violent weekend that started with mostly peaceful protests and later devolved into looting and vandalism across Southern California.

Officers with the Los Angeles Police Department were seen escorting a group of people were arrested into jail on Sunday.

Hundreds of people were taken into custody for violating curfew and other offenses after protests in Los Angeles.

The Southern California protests were in connection to nationwide movements to protest the in-custody death of George Floyd in Minnesota.

In Santa Monica, chaos struck as looters broke into stores just blocks away from a protest. At least nine fires were set in the city to buildings, cars and a dumpster.

Dozens of people were seen taking merchandise from stores in the shopping district.

In downtown Long Beach, looters trapped in a store busting through a boarded up window to escape. Several looters were seen crawling out of a glass window that had been smashed. Police were standing nearby but seemingly made no attempt to stop the looters.

Also in Long Beach, dozens of looters could be seen later breaking into a Hot Topic store at the Pike Outlets down the street.

And in San Bernardino, looters were seen breaking into stores at a strip mall where a dumpster fire burned with no firefighters in sight as people roamed the area.

Los Angeles County has declared a 6 p.m. curfew for Sunday. The curfew will stay in place until 6 a.m. Monday.

Villanueva said he expects the county curfew to be imposed again Monday amid uncertainty over how long violence continues in Los Angeles.