5.4 earthquake strikes Puerto Rico, with some reports of damage 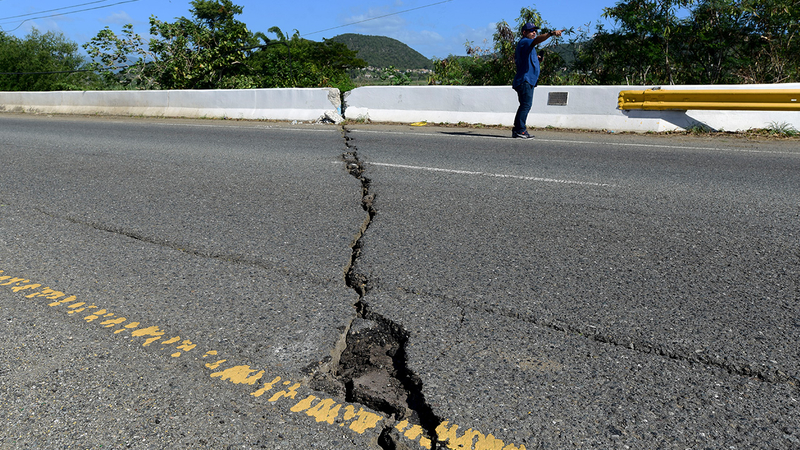 Quake hits near Puerto Rico, some reports of damage

SAN JUAN, Puerto Rico -- A 5.4-magnitude earthquake hit near southern Puerto Rico on Saturday, briefly knocking out power and jolting many from their beds on an island where some people still remain in shelters from previous quakes earlier this year. There were no immediate reports of casualties.

The U.S. Geological Survey said the quake hit at a shallow depth of 5.6 miles (nine kilometers) near the city of Ponce and the towns of Guanica and Guayanilla, where hundreds of homes were destroyed by a quake in early January that killed one person and caused millions of dollars in damage.

Reports of damage were still trickling in on Saturday, with at least one second-story balcony crashing in the southern city of Ponce, spokeswoman Inés Rivera told The Associated Press. Meanwhile, cracks in homes were reported in Guayanilla.

Meanwhile, in Guánica, Mayor Santos Seda told the AP that no major damage has been reported so far, but noted that between five to 10 people remain in a shelter since the 6.4-magnitude quake that hit in January.

"Thank God everyone is OK," he said. "The infrastructure is already weak."

Víctor Huérfano, director of Puerto Rico's Seismic Network, said in a phone interview that while it's understandable many people are afraid and surprised by the most recent earthquake, it's not unusual given the seismic activity that began in the region in late December.

"In the long run, it's decreasing, but you can have peaks," he said, adding that he expects strong aftershocks to continue.

The earthquake struck as Puerto Ricans are ordered to remain home as part of a two-month lockdown to help curb coronavirus cases. Gov. Wanda Vázquez tweeted that rescue crews were fanning out across the area and that she would shortly be traveling there to meet with those affected in person.

"If your infrastructure is damaged, you must leave with your face mask on and your emergency backpack," she said as she urged people to remain calm.

But nerves are already frayed in many parts of the island as Puerto Rico continues to recover from Hurricane Maria, a string of strong earthquakes and the coronavirus. Silvestre Alicea, a 67-year-old man who moved back to Puerto Rico from New York upon retiring, lost his home in January's earthquake and is still living with his sister in Guanica.

"This is unreal," he said, adding that some neighbors have left the area to stay with relatives elsewhere and that many, including a security guard who worked all night, are now sitting nervously in their balconies. "He hasn't slept."