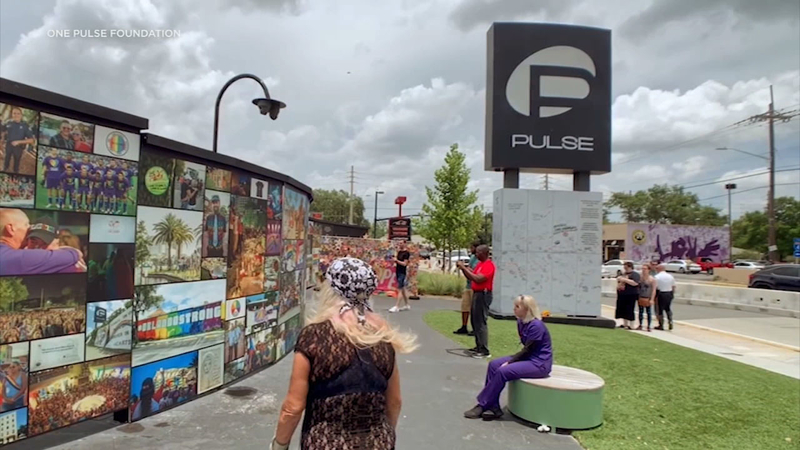 ORLANDO, Fla. -- Out of the tragedy of the Pulse nightclub mass shooting in 2016, Pulse owner Barbara Poma established the onePULSE Foundation, a nonprofit with a motto: "To outlove hate is to win by loving."

The foundation is planning to open a permanent memorial and museum in the nightclub's neighborhood, south of downtown Orlando. U.S. senators this week passed a bill designating the site of the former nightclub as a national memorial. The House has already passed a similar bill. The measure now heads to President Joe Biden's desk for approval.

The 49 victims who were massacred at a gay nightclub shooting were honored this week with a community run, a museum exhibit, a mass yoga session, a gay chorus performance and a street dance party. On Saturday, dozens of survivors of the shooting, family members of those who died and first responders were invited to a ceremony on the grounds of the Pulse nightclub. The site has been turned into an interim memorial lined with photos of the victims and rainbow-colored flowers and mementos.

"When we were discovering what the purpose of the foundation would be, it was really important that we found a way to the light. That we found a way out of the darkness and into real change," Poma said. "I really did feel that we have a social and moral responsibility to be the keepers of the story of what happened here on June 12."

Poma said the foundation's work is focused on these four pillars:

1. Memorial: "A place where you will come to be, to bear witness, feel the peace and the love for this community."
2. Legacy scholarships: "We got together and decided to create community scholarship in each of their names, our angels. The families designate what that scholarship will be for, based on their aspirations or their career achievement."
3. Education programs
4. Museum that will "not only tell their story but will give us the history of the LGBTQ community, its struggle and its progress."

Poma said, "I know this day that you are heavy in your hearts. We are heavy in our hearts here in Orlando. What I can tell you is that we don't want you to just celebrate it or just remember it on June 12. We're all a part of a movement, today and every single day, to move this country and society forward."