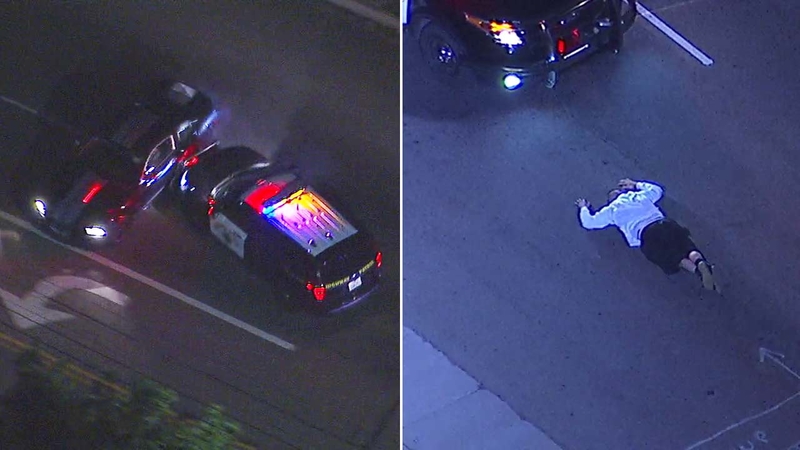 The chase started near Fremont Avenue and Main Street in the El Sereno area shortly before 11 p.m. The driver traveled at speeds of over 100 mph in the blue Ford Mustang, possibly a Shelby model, on the southbound 5 Freeway.

Authorities went into tracking mode while the vehicle was just south of the 710 Freeway.

The suspect drove on surface streets in Commerce, Downey and then Norwalk, blowing through red lights and passing patrol vehicles.

The suspect went back onto the southbound 5 Freeway, weaving across several lanes and making his way to Buena Park. LAPD patrol vehicles were seen following the suspect from afar, apparently still in tracking mode.

The suspect went back onto surface streets for a brief moment before getting onto the 5 Freeway for a third time, where he pushed speeds of up to 109 mph.

The California Highway Patrol took over the chase in the Norwalk area, officially re-engaging the suspect in a pursuit.

The suspect made his way to Manchester Avenue in Downey, where he traveled at speeds of over 110 mph, passing red lights and maneuvering around several cars on the road.

Back on the 710 Freeway in the Bell area, the suspect drove through construction cones. Soon after, with two CHP vehicles on the Mustang's tail, smoke was seen coming from underneath the car.

#CHASE Smoke appears to be coming out from underneath the vehicle as suspect travels NB 710 Fwy https://t.co/TxMSbTKVFr pic.twitter.com/g5d1NlzFdQ

The driver went onto the eastbound 60 Freeway in East L.A., with lanes free of other vehicles. The suspect continued traveling on the same freeways, eventually getting back onto the 710 Freeway and exiting in Monterey Park.

The driver slowed down, allowing CHP patrol vehicles to follow closely on surface streets as the driver got into the Alhambra area.

The suspect drove along narrow residential streets for some time, making it difficult to pick up speeds and evade authorities.

At one point, it appeared CHP vehicles were close to pinning the Mustang in a neighborhood street, but the suspect managed to get away and picked up speeds above 60 mph on Valley Boulevard.

On Valley Boulevard and Rowan Avenue near the East L.A. area, a CHP vehicle was eventually able to do a PIT maneuver, causing the Mustang to spin and come to a rest.

The suspect got out of the vehicle with his hands up before being taken into custody by authorities without incident.