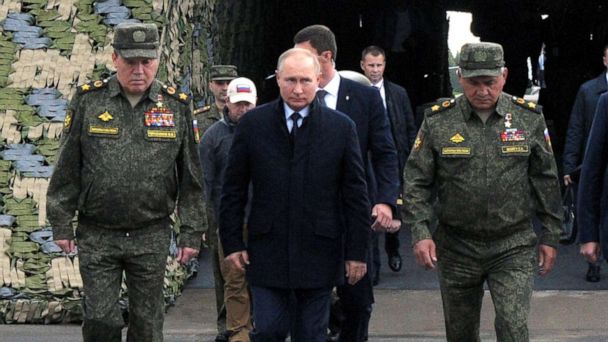 MULINO FIRING RANGE, Russia -- Russian President Vladimir Putin watched a huge display of firepower put on by his military Monday when he attended the finale of what is believed to be the largest Russian war games held in Europe since the Cold War.

The joint exercises with Belarus -- called Zapad -- take place every four years and their main phase began last week, involving tens of thousands of troops and hundreds of tanks, aircrafts and warships at sites across western Russia and in Belarus.


Zapad -- which means "West" in Russian -- is intended to test the country's ability to fight a major war with NATO on its western border. The exercise has its origins in the Cold War, but in recent years as relations have worsened with the West, Putin has increased their scale, using them to illustrate restored Russian power.

Russia has claimed this year's exercises involve 200,000 troops, but most military analysts believe that is a significant exaggeration, and the real figure is likely something closer to 50,000 to 100,000.

Putin on Monday attended what amounted to a heavily scripted, grand finale to the drills which took place at a firing range near Nizhny Novgorod, a city about 300 miles from Moscow.

From a grandstand overlooking the Mulino range, Putin watched the event through a pair of binoculars, while heavily armed snipers kept guard.

In the exercise, the Russian-led force was defending against a military belonging to a notional enemy, named "the westerners." Besides Russian and Belarusian troops, small contingents from India, Kyrgyzstan, Kazakhstan, Mongolia and Armenia also participated.

The display watched by Putin appeared notably larger than that put on in 2017, at the last Zapad exercises -- and those drills rattled nerves in eastern Europe, amid overheated speculation that they might be used to cover an imminent Russian invasion.


Lukashenko's crushing of the peaceful protests, with Russia's support, has placed him and Moscow in confrontation with European countries and the United States.

Since Lukashenko sought rescue from the Kremlin, there have been concerns that Putin will use that leverage to demand he fulfill a long-time Russian goal of integrating Belarus with Russia. Last week, as the exercises began, Putin and Lukashenko announced plans for significantly deeper economic integration, under the slogan "Two countries, one economy."

With Lukashenko now dependent on Russian support to remain in power, both sides are using the drills to emphasize Moscow's strong backing of the Belarusian leader.

"It is in Minsk's interest to invite a much larger Russian footprint as a show of support for the regime," Michael Kofman, director of the Russia Studies Program at the Center for Naval Analyses, wrote in an article for the website War on the Rocks last week.

"Judging from early deployments and training range selection, a more sizable Russian contingent will be in Belarus and Russian troops will be much closer to the borders with Poland than they were during previous Zapad exercises," said Kofman.

The exercise's imagined scenario simulated Russia helping Belarus to defend against an attack by three fictional states, "Nyaris," "Pomoria" and the "Polar Republic" -- thinly disguised versions of Lithuania, Poland and a Scandinavian country.

Lukashenko has claimed the protests against him are part of a planned invasion of Belarus by NATO countries, repeatedly making wild claims last year that western forces were massed on the border.

This year's Zapad drills appeared partly to incorporate that scenario, including scripts where western-backed "terrorists" provoked instability, as a pretext for invasion.


Belarus' neighbors Poland and Lithuania have expressed unease about the exercises again this year. Both countries are already struggling with a migration crisis engineered by Lukashenko in relation to their support for pro-democracy opposition. In recent months, European officials have accused Lukashenko of flying in thousands of migrants, mostly from Iraq, and pushing them across the border.

The exercises, though important for training, are also in many ways also a campaign tool for Putin. Stephen Ganyard, a former Deputy Assistant Secretary of State and ABC News contributor said the shows of force are "mostly for domestic consumption."

Military experts have cautioned against accepting Russia's claims about the size of the exercises, which they warn are partly intended to give an exaggerated impression of Russian military power.

NATO has also accused Russia of failing to formally declare the real number of troops involved. A 1990 agreement, the Vienna Document, obliges Russia to invite observers from the Organization for Security and Cooperation in Europe (OSCE) for exercises involving more than 13,000 troops. But despite its public statements that 200,000 are taking part, Russia has circumvented the rule by claiming fewer than 13,000 troops are participating in each individual drill.

Russia has insisted the exercises are entirely defensive and at firing ranges last week Russian commanders were careful to repeat the drills were not intended to be threatening.