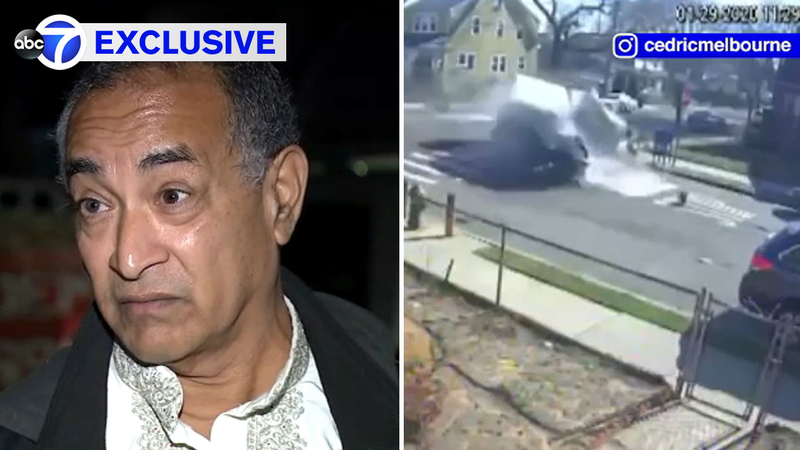 QUEENS, N.Y. -- The driver of a stolen truck is speaking out about after a group of teens stole a Catholic Charities truck and took it on a joyride before plowing into a car and flipping the stolen vehicle.

The truck also slammed into a home around 11:30 a.m. Wednesday on 119th Avenue and 192nd Street in St. Albans, leaving debris strewn across the lawns of two homes.

The violent collision was caught on video by home security cameras, and somehow no one was killed or seriously hurt.

Authorities say the 63-year-old driver was making a food delivery for Meals on Wheels around 9:15 a.m. and left the vehicle running in front of a home on Baisley Boulevard, when three teens jumped into vehicle and fled northbound toward 171st Street.

The driver, Balroop Primal, said he left the keys in the ignition while he was making the delivery.

"I thought the truck was locked so I went up," Primal said. "You know I do it every day, six days a week. And by the time I come downstairs less than 10 minutes, the truck was gone."

Primal reported the vehicle stolen and received a summons for leaving the truck running but did manage to finish delivering meals after getting new vehicle.

"I was all shaken up because I've been driving for over 10 years, and it's the first time this has ever happened to me and I take care of that truck like my own," he said.

A 19-year-old girl was arrested after she returned to the scene to retrieve her phone. She was identified as Tannecia Dunn and is facing charges of criminal possession of stolen property and unauthorized use of a vehicle.

The other two teens that fled the scene are believed to be males. It is still unclear who was driving the stolen truck.

The 20-year-old driver of the car that was T-boned suffered a minor injury but is expected to be OK.