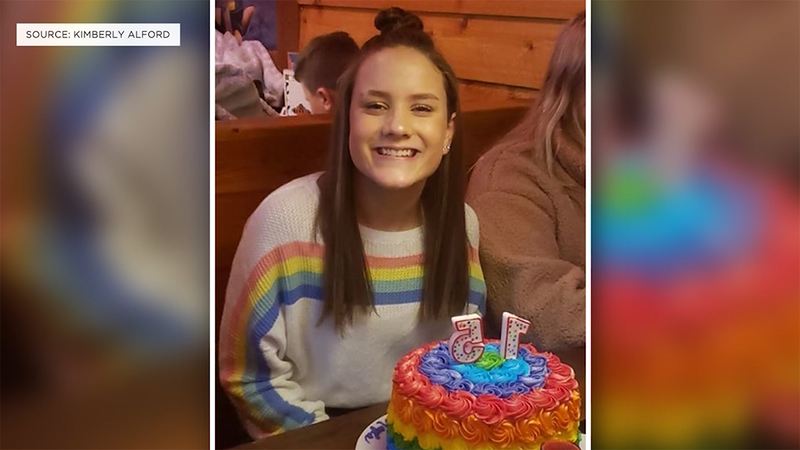 LOUISVILLE, Ky. -- A former private school student's family said she was expelled for wearing a rainbow shirt and celebrating her birthday with a rainbow cake.

For her 15th birthday, high school freshman Kayla Kenney went to a restaurant with family and friends. Her mother, Kimberly Alford, recorded a video of her daughter smiling and laughing before blowing out the candles on top of a multicolored cake, according to WAVE-TV.

Alford said she posted the video to Facebook, which was shared with staff at her daughter's school, Whitefield Academy in Louisville, Kentucky.

Afterward, the school sent a letter to Kenney's family saying the 15-year-old was being expelled, effective Jan. 6, for "a continued breach of the Whitefield code of conduct, which was discussed in-person on October 17, 2019."

Alford said she also received an email, saying her daughter's behavior "demonstrates a posture of morality and cultural acceptance contrary to that of Whitefield Academy's beliefs." Alford said the daughter's email was in reference to the post on social media, while the school said Kenney violated the student code of conduct numerous times over the past two years.

"I feel judged, she feels judged, very just devastating for us," Alford said.

The school's code of conduct addresses sexual orientation and notes that a student's off-campus behavior must align with those beliefs or face disciplinary action.

"All parents who enroll their children in our private school know up front that we ask the students to adhere to a lifestyle informed by our Christian beliefs," the school said in a statement.

Even though rainbows and rainbow flags represent gay pride in some contexts, Alford said she wants to know why her social media post brought the school to their conclusion.

"She loves to laugh and dance, and that's just her. There was nothing intended by that, and even when I went back and got the receipt from the bakery, it didn't say anything about representation. It just said 'assorted colors,'" she said.

Alford filed an appeal but said the school refused to meet with her. The academy then agreed to change the expulsion to a voluntary withdraw so it doesn't live on Kenney's record.

Yet Alford fears this may have a permanent impact on her daughter.

We teach our kids, 'What would Jesus do?' What would he do here?" she said.

"Inaccurate media reports are circling stating that the student in question was expelled from our school solely for a social media post. In fact, she has unfortunately violated our student code of conduct numerous times over the past two years. In the fall, we met with the student to give her a final chance to begin to adhere to our code of conduct. Unfortunately, she did not live up to the agreement, and therefore, has been expelled.

"Whitefield Academy is a Christian-based school with a 43-year history of educating students in a learning environment informed by our shared Christian values. All parents who enroll their children in our private school know up front that we ask the students to adhere to a lifestyle informed by our Christian beliefs. There are numerous school options in our community for students who do not wish to attend a Christian-based school, and we wish our former student all the best as she finds a learning environment that is right for her.

"Whitefield Academy is accredited by ACSI/AdvancEd and a member of the Non Public School Commission of Kentucky, and therefore we meet all Kentucky regulations and laws. Our code of conduct is on par with other private Christian schools in our area. It is unfortunate that one of the student's parents chose to post internal family matters on social media, and we hope our former student is not adversely affected by what her parents chose to make public about her situation."
Report a correction or typo
Related topics:
societykentuckylgbtqhigh schoolu.s. & world
Copyright © 2022 KABC Television, LLC. All rights reserved.
TOP STORIES
Service dog dies after being attacked by 2 pit bulls in Koreatown
Police investigating smash-and-grab robbery at OC jewelry store
Man believed to have set BMW on fire in DTLA in custody, police say
Over 100 shots fired in Inglewood ambush that killed 4, neighbor says
NBA player Jaxson Hayes charged with domestic violence in LA
Biden caught on hot mic calling Fox News reporter a vulgarity
CA students must get COVID-19 vaccine under new proposed bill
Show More
Rams hoping to keep 49ers fans from taking over SoFi Stadium
Growing the American dream in new ABC drama 'Promised Land'
Bad Bunny announces stadium tour stop at SoFi Stadium
Wild Wall Street: Up-and-down day reflects market uncertainty
Super Bowl Experience jam packed with games for fans of all ages
More TOP STORIES News