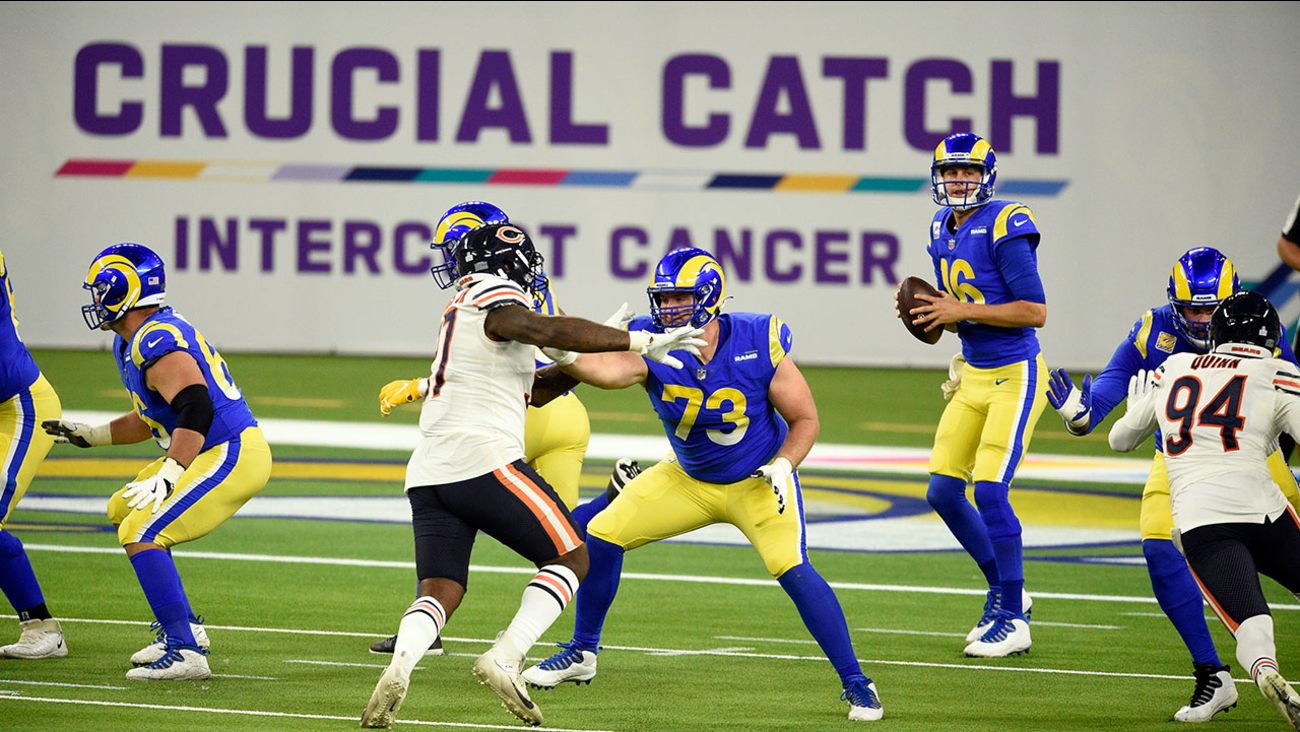 Los Angeles Rams quarterback Jared Goff takes a snap during the first half of the Rams game against the Chicago Bears Monday, Oct. 26, 2020, in Inglewood, Calif. (AP Photo/Kelvin Kuo)

Goff passed for 219 yards and Malcolm Brown rushed for a score for the Rams (5-2), who remained unbeaten at brand-new SoFi Stadium and reasserted themselves as NFC contenders with a rebound performance one week after a rough loss at San Francisco.

Taylor Rapp made an end-zone interception on a pass deflection by Troy Hill while the Rams held Chicago (5-2) to 182 yards in the first three quarters and built a 24-3 lead.

Eddie Jackson returned a fumble 8 yards for Chicago's only touchdown with 7:30 to play, but Los Angeles' defense stayed in control, yielding 279 total yards and three points. The Rams have won twice in three defense-dominated games between these longtime rivals over the past three seasons.

Nick Foles passed for 261 yards for the Bears, who dropped out of the NFC North lead and fell to 3-1 on the road with their latest discouraging offensive performance. Chicago managed just 49 yards rushing and has 175 yards on the ground in the past four games.

The Rams' defense, now coordinated by former Bears outside linebackers coach Brandon Staley, sacked Foles four times and picked off two of his passes, including Jalen Ramsey's first interception of the season near midfield to clinch the victory with 3:13 to play.

Even punter Johnny Hekker dominated the Bears, pinning them inside their 10 with all five of his punts in a superb performance by the four-time Pro Bowler.

The Rams led 10-3 at halftime after holding the Bears to 126 yards. Reynolds made his 4-yard TD reception on the second drive for just the second scoring catch by a wide receiver against Chicago's stingy secondary all season, but the Bears stopped two additional drives just outside field goal range to keep the deficit manageable.

The Rams went up 17-3 midway through the third quarter on a TD drive capped by Brown's 1-yard run.

Chicago mounted its best drive immediately thereafter, but its 71-yard march ended when Hill deflected a pass intended for Darnell Mooney in the end zone and Rapp snagged it for an interception.

The Rams followed with a crisp 80-yard drive capped by a 12-yard TD catch-and-run by Everett, their big-play tight end.

Chicago got to the Rams 4 with just over nine minutes to play, but Aaron Donald flushed Foles from the pocket and into Justin Hollins' arms for a fourth-down sack.