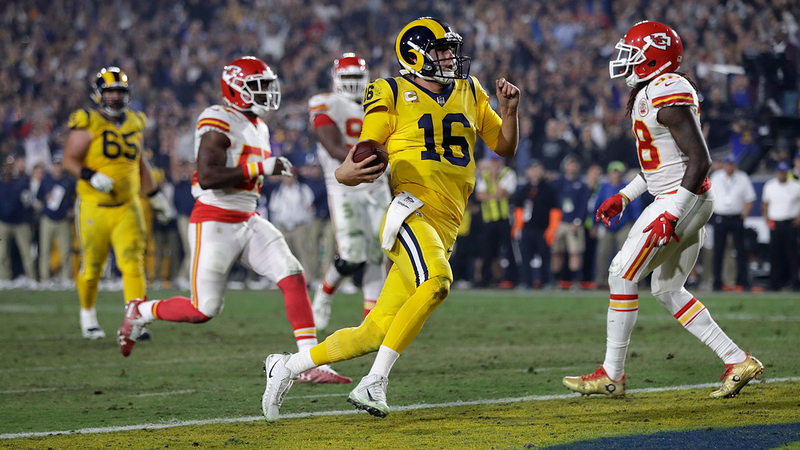 The game had everything fans could have hoped for - stellar deep passing from two of the league's top young quarterbacks, scoring off aggressive defense and a wild series of lead changes throughout the night.

The combined score was the highest ever for a Monday Night Football game. It was also among the top three highest scoring NFL games ever. It was also the first game ever where both teams scored more than 50 points.

"What a great football game tonight, in terms of just the competitive nature of the game," Rams Coach Sean McVay said afterward. "Guys responding back and forth - all three phases, special teams, offense, defense."

The game had originally been scheduled for Mexico City, but was moved last week to Los Angeles because of poor field conditions at Azteca Stadium.

With the two teams bringing identical 9-1 records into the matchup, some saw the game as a potential preview of this season's Super Bowl.

This one was for you, LA. @JaredGoff16 + @awhitworth77 share the win with families of the victims from the Borderline shooting. #LATogether pic.twitter.com/mFPBgVC54E

The two teams combined for 1001 yards of offense.

Mahomes threw six touchdown passes in his latest jaw-dropping performance for the Chiefs, who fell to 9-2. But he also threw two interceptions in the final 1:18 as the Rams hung on for the win.

The victory brings the Rams to 10-1, the top record in the NFL.

Goff passed for 413 yards and four touchdowns, while Marcus Peters and Lamarcus Joyner came up with late interceptions to help seal the win.