Rams beat the Giants 17-9 with big help from defense, improve to 3-1 record

The Los Angeles Rams dispatched the winless New York Giants on Sunday at SoFi Stadium, giving them a 3-1 start on the season.
AP 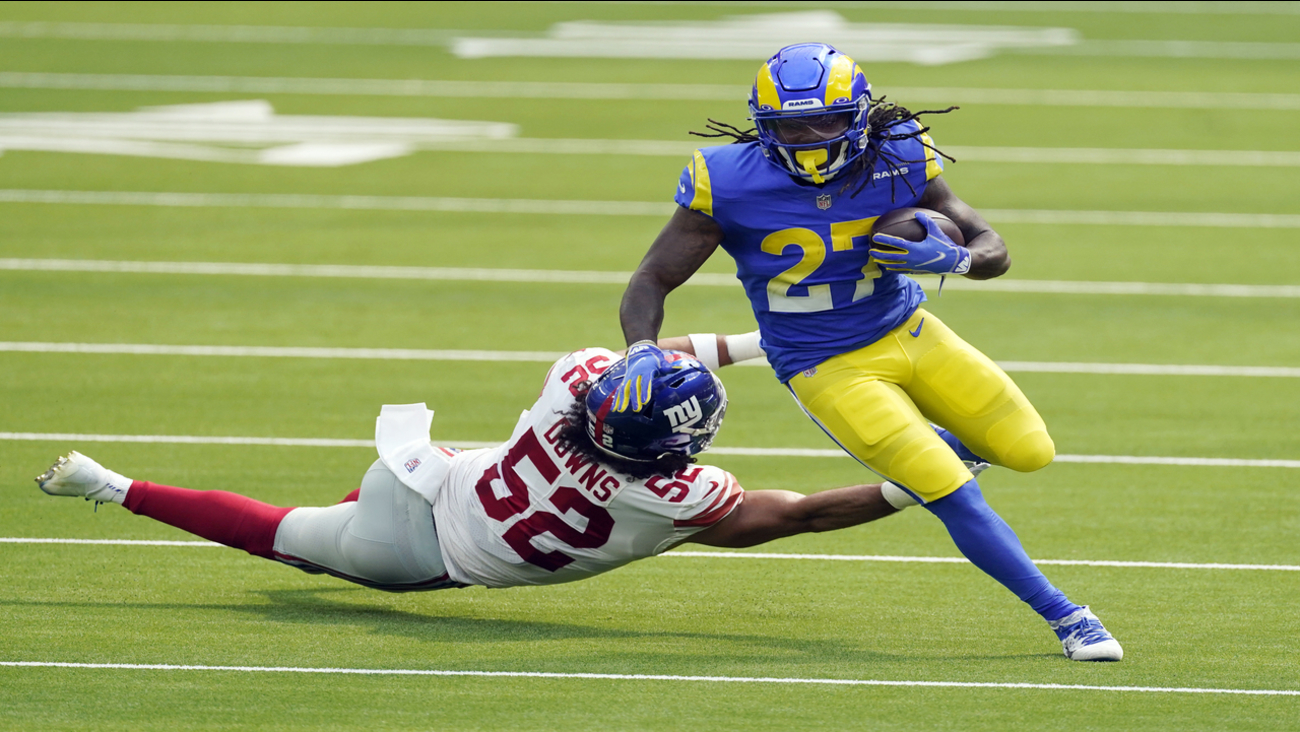 INGLEWOOD, Calif. -- Jared Goff hit Cooper Kupp for a 55-yard touchdown with 6:56 to play, and the Los Angeles Rams grinded out a 17-9 victory over the New York Giants on Sunday in a game marred by a postgame fight between Rams cornerback Jalen Ramsey and Giants receiver Golden Tate.

The win moves the Rams to 3-1, but they remain second in the NFC West behind the 4-0 Seattle Seahawks.

Ramsey and Tate scuffled at midfield after the final whistle after a game filled with trash-talking between the two Nashville-area natives. Ramsey has two young children with Tate's sister, and Tate was publicly upset last year when the couple went through a nasty public breakup.

Ramsey and Tate both walked toward midfield when the game ended, and they immediately took swings at each other, eventually going to the turf in a heap. The veterans' teammates pulled them apart.

Before their fight, Ramsey and Tate clashed several times on the field. They visibly trash-talked each other before and after whistles, and Ramsey made a spectacular hit on Tate early in the fourth quarter to force a fourth down.

Tate has spoken publicly in the last year about his disappointment with Ramsey. Tate's sister, Breanna, was a track star at Ole Miss.

Darious Williams made a redemptive, diving interception at the Los Angeles 7 with 52 seconds to play as the Rams (3-1) barely stayed unbeaten at new SoFi Stadium and kept first-year Giants coach Joe Judge winless.

After a dominant opening drive, Los Angeles struggled to get free from the Giants (0-4) until the speedy Kupp caught a pass behind New York's linebackers and sprinted through the secondary for the Rams' first touchdown since their opening drive. That was the only TD pass for Goff, who went 25 of 32 for 200 yards.

Daniel Jones passed for 190 yards and rushed for 45 for the Giants, who haven't scored a touchdown in their last two games. New York had two chances with the ball after Kupp's TD, but the Giants turned it over on downs before Jones drove them deep into Rams territory.

Williams was whistled for a debatable pass interference penalty on fourth down in the final minute of the Rams' 35-32 loss at Buffalo last week. The cornerback came up huge on a pass by Jones intended for Damion Ratley, diving to get both hands on the ball just above the turf.

New York's defense gave an admirable effort against the NFL's third-ranked offense entering Week 4, but its offense stalled three times in the red zone before its late misadventures. Graham Gano kicked three field goals in the Giants' first game in the Los Angeles area since 1994.

Tight end Gerald Everett had his first career rushing touchdown for the Rams on their opening drive, but they managed just three points from their next six drives before Kupp took off through New York's defense to cap a 91-yard march. Sean McVay's offense produced 240 total yards after topping 400 yards in each of its first three games.

Everett's fumble allowed the Giants to kick their first field goal, but the Rams battered Jones with four sacks in the first four drives.

The Giants trailed only 10-6 at halftime despite gaining 67 total yards.

The Rams improved to 28-0 when leading at halftime under McVay.