Lamar Jackson, Ravens dominate in 45-6 win over the Rams in Los Angeles LOS ANGLLES (KABC) -- Lamar Jackson threw for five touchdowns and ran for 95 yards as the surging Baltimore Ravens dominated the Rams in a 45-6 win in Los Angeles on Monday.

Jackson was so effective that he didn't need to play most of the fourth quarter after running up the score to 42-6 at the Coliseum.

As Jackson had his way on offense, the Ravens defense was equally effective containing Jared Goff and Todd Gurley.

The defensive performance was punctuated with a fourth-quarter interception by Marcus Peters, the cornerback that the Rams traded away earlier in the season around the time they acquired Jalen Ramsey.

Jackson became the first player in NFL history to have five passing touchdowns in his debut on Monday Night Football. He also is now the first to have 3,000 passing yards and 1,500 rushing yards in his first two seasons.

Goff passed for 212 yards with two interceptions and Gurley rushed for just 22 for the defending NFC champion Rams, who took the worst loss of their three seasons under coach Sean McVay.

Los Angeles hadn't lost by more than 21 points in its first 43 games under McVay, whose once-prolific offense had another embarrassing performance with just 111 yards in the first three quarters before finishing with 221. The Rams failed to score a touchdown for the second time in three games.

In the Coliseum's first Monday night game since the Rams' epic 54-51 win over Kansas City last November, the Rams gave up one more point than they had allowed in their previous four games combined. The Rams also were among the NFL's best offensive teams for the previous two seasons, but they've lost that status this year while Baltimore has ascended to dominance.

The win moves the Ravens to 9-2, while the Rams drop to 6-5. Los Angeles remains in the hunt for a postseason berth, but those hopes are starting to look more and more dim.

Next up, the Rams face the Cardinals (3-7) in Arizona on Sunday. 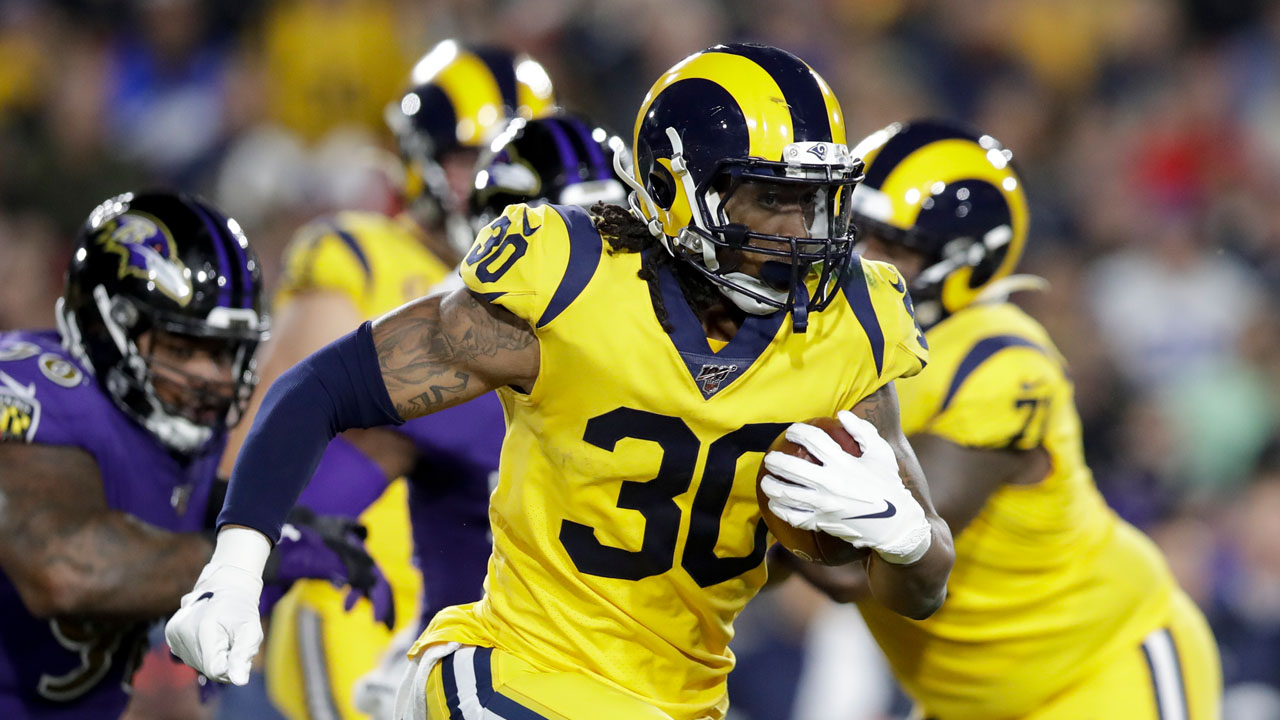 Los Angeles Rams running back Todd Gurley runs against the Baltimore Ravens during the first half of an NFL football game Monday, Nov. 25, 2019, in Los Angeles.