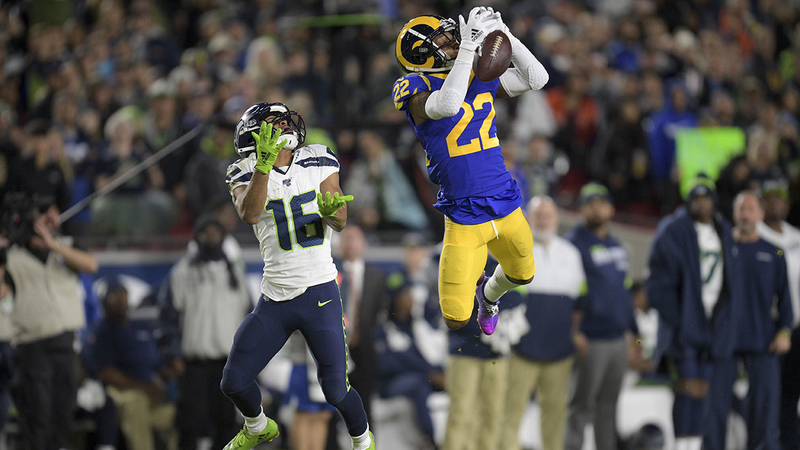 LOS ANGELES (KABC) -- Entering Sunday, the Seahawks were riding a five-game winning streak with a potential MVP candidate at quarterback. But that mattered little to the Rams.

Los Angeles took down Seattle in a 28-12 win before 71,501 fans at the Coliseum, keeping the Rams in the hunt for a playoff spot.

Jared Goff threw for 293 yards and two touchdowns. He also was intercepted twice, including a pick-six that, for a short time, seemed to give Seattle new life.

Todd Gurley II had 23 carries for 79 yards and a touchdown, plus 34 receiving yards.

The Rams defense contained Russell Wilson, keeping him to no touchdowns even as he otherwise stars in what is shaping up as an MVP-caliber season. With 1:25 left in the game, Wilson was picked off in the end zone by Rams cornerback Troy Hill.

My Cleats My Cause
These are the cleats @JaredGoff16 is wearing tonight!
It’s his arm that is #CaliforniaStrong in the first half! 15-18, 184-yards and 2 scores!
#Rams 21
#Seahawks 3#abc7eyewitness pic.twitter.com/3MrmHBfhPO

The win over a tough NFC West rival gives the 8-5 Rams an added morale boost amid some struggles this season, less than a year after their Super Bowl appearance. In the fight for a wild-card spot, they're just behind the 9-4 Minnesota Vikings.