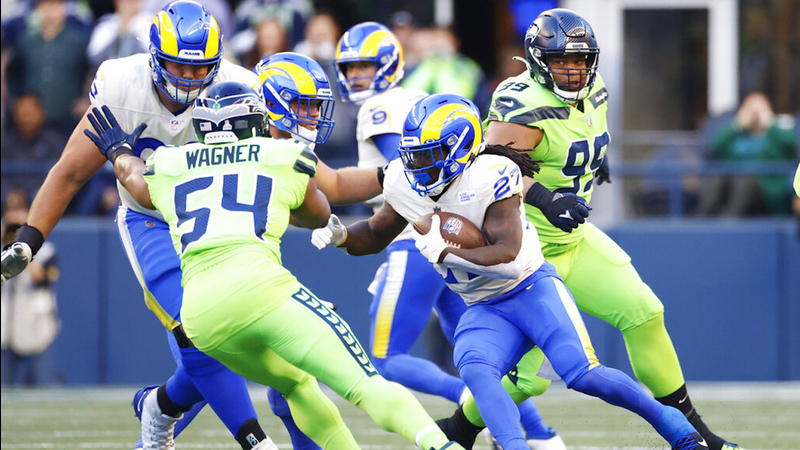 SEATTLE -- Matthew Stafford threw for 365 yards and a touchdown and the Los Angeles Rams beat the Seattle Seahawks 26-17 on Thursday night in a game Russell Wilson left in the second half with a finger injury on his throwing hand.

Wilson missed significant game time due to injury for the first time after injuring the middle finger on his throwing hand. He was hurt by contact on a follow through midway through the third quarter. He attempted to direct one more drive before turning the game over to backup Geno Smith.

Held to just three points in the first half for only the fifth time in the regular season under Sean McVay, the Rams (4-1) woke up in the final 30 minutes and rebounded from their first loss of the season last Sunday to Arizona.

Stafford threw a 13-yard touchdown pass to Tyler Higbee late in the third quarter to give the Rams a 16-7 lead, also appearing to play with an injured finger on his throwing hand. Stafford hit DeSean Jackson for 68 yards earlier in the quarter on third-and-10 that led to Darrell Henderson's 5-yard run that gave Los Angeles its first lead of the game.

Robert Woods had 12 catches for 150 yards and the Rams won their second straight in Seattle after last January's playoff victory over the Seahawks.

But Smith couldn't lead a storybook final drive, with his first pass intercepted by Nick Scott as Tyler Lockett tripped making his break. Smith was 10 of 17 for 131 yards in the fourth quarter.

Smith was needed because Wilson's fingers hit Aaron Donald's arm on the follow through of a pass that nearly went for a touchdown but was slightly overthrown midway through the third quarter.

Wilson remained in for one more series and attempted one pass. He was sacked on third-and-5 by Donald, No. 88 1/2 of his career setting a new franchise record - although the Rams records don't include Deacon Jones as sacks weren't an official stat when he played.

Wilson never took another snap and finished 11 of 16 for 152 yards, one touchdown and his first interception of the season.

Smith entered with Seattle backed up at its own 2. Since arriving in Seattle at the start of the 2019 season, Smith had thrown a total of five passes, all of them coming in a blowout win over the Jets last season.
On his first drive, Smith was perfect. He was 5 of 5 for 72 yards, the last a 23-yard strike to DK Metcalf for his second touchdown of the game with 9:23 remaining to pull Seattle to 16-14.