A video of a California deputy subduing and punching a 14-year-old boy multiple times has prompted a use-of-force investigation.
KABC 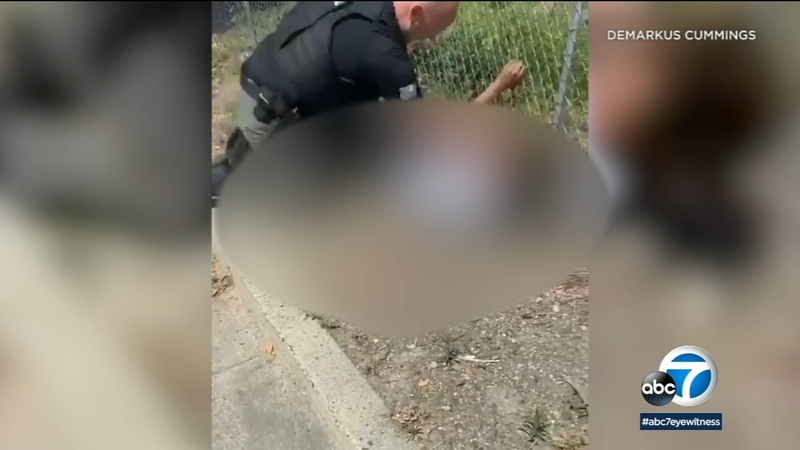 RANCHO CORDOVA, Calif. (KABC) -- A video of a California deputy subduing and punching a 14-year-old boy multiple times has prompted a use-of-force investigation.

The video shows the deputy in Rancho Cordova with his knee near the boy's chest as the teen appears to struggle with him. The deputy pins the boy's head to the ground momentarily before he starts punching him a number of times.

The video does not show the beginning of the incident or its conclusion.

In a news release, Sacramento County Sheriff's Office spokeswoman Sgt. Tess Deterding said the incident happened on Monday and the investigation is in its "infancy."

The deputy with the Rancho Cordova Police Department was patrolling the area due to complaints about hand-to-hand sales of alcohol, tobacco and drugs to minors, according to the Sacramento County Sheriff's Office.

"It's important to put video footage into context, especially in relation to a use of force incident," the statement said. "In this case, the deputy saw what he believed to be a hand-to-hand exchange between an adult and juvenile."

Deterding said the deputy lost sight of the adult, who left the scene, and that the boy was uncooperative when approached. The 14 year old allegedly did not provide "basic identifying information" but said he was 18.

"Having reasonable suspicion that criminal activity was occurring, the deputy attempted to detain the juvenile so he could conduct further investigation," the statement said. "The juvenile became physically resistive at that time, causing the deputy to lose control of his handcuffs, which landed several feet away."

Deterding said the deputy was alone and waiting for other deputies when he attempted to maintain control of the boy without his handcuffs.

Deterding said the deputy found the teen with tobacco products, "which is presumably the reason for his resistance." The 14-year-old boy was cited and released to his guardians.

The Sacramento County Sheriff's Office and Rancho Cordova Police Department started an investigation to "in order to gain a complete and thorough understanding of the events that took place during this incident."

"This type of situation is hard on everyone -- the young man, who resisted arrest, and the officer, who would much rather have him cooperate," the statement said.

Sen. Kamala Harris tweeted the video, calling the incident a "horrific abuse of power" and added that the officer "must be held accountable."