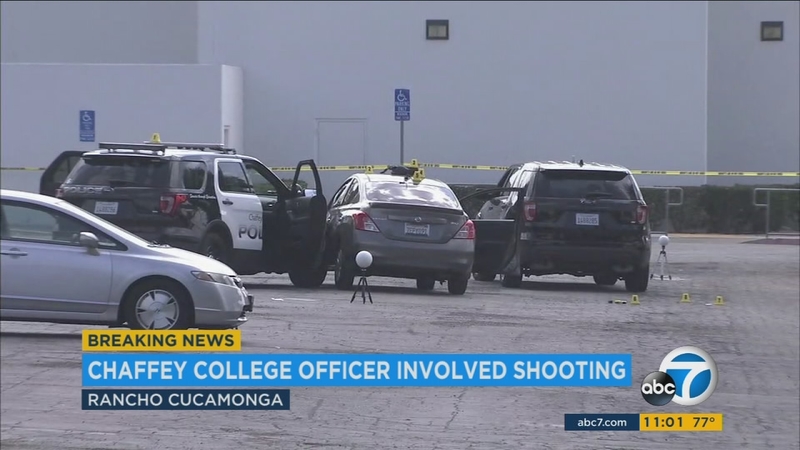 RANCHO CUCAMONGA, Calif. (KABC) -- A woman was in custody following an officer-involved shooting and brief chase at Chaffey College in Rancho Cucamonga on Tuesday.

Rancho Cucamonga police responded to a call of a campus officer-involved shooting at about 6:40 a.m. in the northwest parking lot of the school. Deputies arrived and found the female suspect, Jullian Burdwell, detained by the college police officer.

According to an initial investigation, officials learned Burdwell was contacted by the school officer inside her parked car in the parking lot. During the contact, "circumstances" led to an officer-involved shooting, San Bernardino County sheriff's officials stated in a press release.

Burdwell drove away from the scene and a brief chase involving the Chaffey College officer and Burdwell ensued on several city streets before the suspect reentered the northwest Chaffey College parking lot.

The officer noticed several school employees walking in the area and believed Burdwell was directing her car toward their direction. The officer conducted a legal intervention maneuver and disabled Burdwell's car. She was then taken into custody.

Burdwell was not struck by gunfire but was transported to an area hospital for evaluation, officials said.

A Taser, baton, smashed cellphone and purse were spotted near the woman's car.

Meantime, it appeared classes were not in session during the incident, but employees at the campus were told to avoid Lot 2 as an investigation continued.