KABC
By ABC7.com staff
LOS ANGELES (KABC) -- Charges have been dropped against a USC student who had been accused of drugging and raping another student in her dorm room.

Armaan Karim Premjee, 20, was arrested in April after being accused of assaulting the woman in her room on April 1. He was facing a charge of rape by use of drugs and sexual penetration by a foreign object.

Both charges were dropped during a preliminary hearing last week - one dismissed by the judge and one withdrawn by the prosecutor, according to Premjee's defense attorney.

"I never doubted my innocence because I knew from the very beginning that I hadn't done anything wrong," Premjee said.

At the time of his arrest, authorities said the victim's roommate had walked in the room after the alleged crime had occurred. He was in the bathroom and the roommate confronted him and he left.

"I don't think you'll ever see a rape case with clearer evidence of consent," Braun said.

Braun said the evidence included surveillance video of the woman at a popular bar near USC making a sexual gesture to a friend - poking a finger through a circle made with her hand - that indicated she planned to have sex with Premjee.

"I was just very relieved that there was a video to prove it because without a video, I don't know what I would have done," Premjee said.

Premjee added that he never thought the woman was incapable of giving consent when they were both intoxicated at the bar.

Other evidence in his favor included an Uber driver saying the woman was "jumping all over" Premjee in the vehicle's back seat, Braun said.

Another surveillance video shows the woman checking Premjee into her dorm. The 20-year-old business major said he is now focused on his family and future.

If convicted as charged, Premjee could have faced a maximum of 10 years in prison. 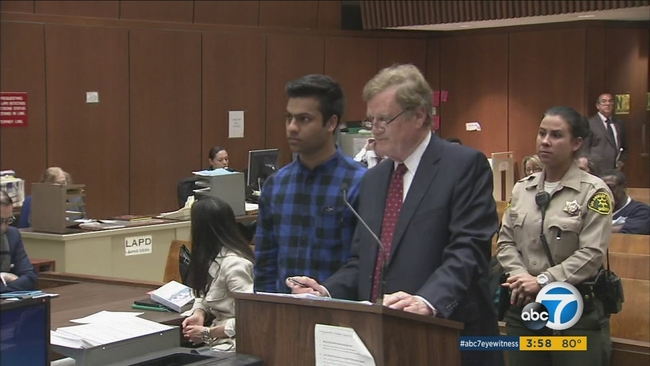