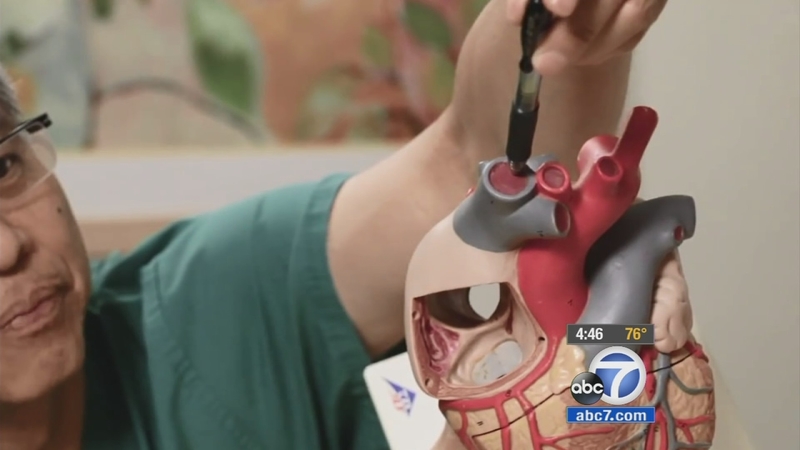 LOS ANGELES (KABC) -- A Baldwin Hills high school freshman thought all her life she would have to live with a baffling liver condition never knowing if she could ever be cured.

The mystery was finally solved when doctors at Children's Hospital Los Angeles discovered the problem wasn't her heart at all.

As a baby, Blanca Ortega Banuelos' liver was quite enlarged, but various scans and tests didn't provide any answers, just more questions.

As Banuelos got older, strenuous activities took the wind out of her. Twice she landed in the ER.

"I used to get tired a lot," said Banuelos. "I couldn't play soccer, softball, volleyball, basketball."

For 13 years, nearly every doctor Banuelos saw thought something was wrong with her liver, but they couldn't figure out what. Cardiologists dismissed her case too because her heart appeared healthy.

But then, doctors at CHLA decided to take a second look.

"And it was in those pictures that we saw that she had a blockage in the vein before it got into the heart," said Dr. Frank Ing, director of CHLA's Heart Institute.

It was a blockage so thin, CT scans couldn't detect it. But an angiogram clearly shows blood that's supposed to be heading to her heart is turned away. It's flooding her liver and scattering to different places.

Ing says it's like a freeway traffic jam and Banuelos' blood was making its way back to her heart on side streets.

"The blood would then travel through these small vessels, go through all the different parts of the liver, back into the body, and then find its way back into the heart, usually coming from above," said Ing.

He says he's never seen a pediatric case like this documented in the U.S. Left untreated, it could lead to liver disease and other serious complications.

"The nice thing is that this can be easily fixed," said Ing.

In the cath lab, Ing opened up the blockage and placed a stent in her inferior vena cava. Banuelos' liver returned to its normal size, and now her blood flows to her heart the way it should.

Banuelos' mom thought her daughter would never reach her 10th birthday. Now, the 14-year-old dreams of one day becoming a pediatrician.