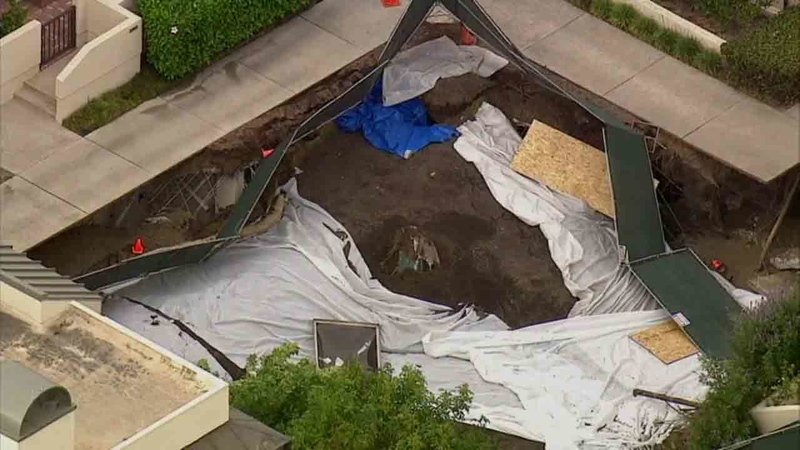 CENTURY CITY, LOS ANGELES (KABC) -- Dozens of Century City residents were evacuated Friday due to the partial collapse of an underground parking structure.

The incident happened at 10100 Galaxy Way at about 7:30 a.m. Fire officials believe the collapse was caused by the weight of construction material.

"As part of a landscaping project, construction crews were using bobcats to handle lava rock and dirt. The heavy weight of the material being stored was too much for the structural integrity of the parking garage," LAFD spokesperson Eric French said in a statement.

LAFD initially said the collapse was caused by a large planter that fell from a crane.

"It was the tons of dirt and lava rock that was being stored on top of that parking structure that actually compromised the structural integrity of this building, causing these five cars that are underneath to be sandwiched and crushed under all that weight," LAPD Capt. Jaime Moore said.

No injuries have been reported. Search dogs were sent in to ensure that no one was trapped. Authorities say all residents were accounted for.

The damage was very extensive, forcing officials to evacuate nearby homes. About 80 people were displaced, LAFD said.

Loree Myers and Nettie Beck were two of the dozens evacuated after the parking structure near their townhomes collapsed.

"I've been watching them pile that dirt up. I've kept thinking, cause I walk that way every morning from the pool, and I'm wondering why they're not taking the dirt elsewhere," Beck said.

One person was taken to a hospital by ambulance because that person was recovering from surgery and could not evacuate without help. Everyone else who was evacuated was taken to the complex's recreation center.