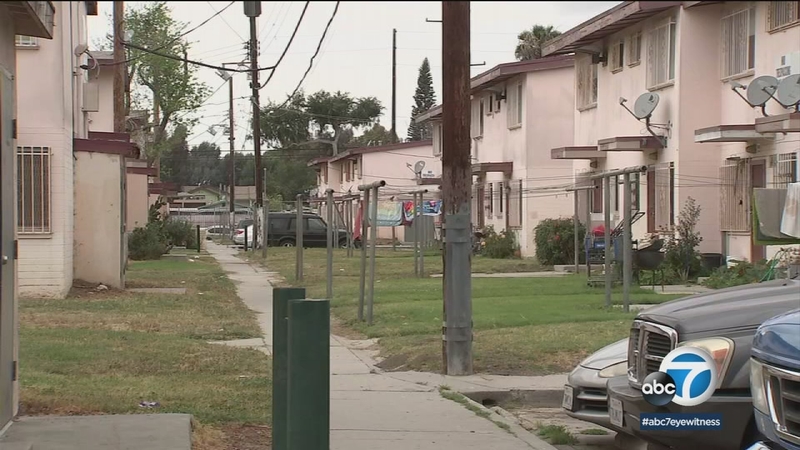 WATTS, LOS ANGELES (KABC) -- Delio Marte has lived in public housing in Watts for six years. The rent his family pays is 30 percent of their household income, but Marte said in the last month, it's gone from $726 a month to over $1,100 per month.

"My income, when we did the yearly reviews, it was pretty high because my hours fluctuate. Now my hours are pretty low and my last pay check was $307. You can't pay rent with that. Me and mother say, 'What are we going to do, pay rent or buy food?'" said Marte.

Marte, a few of his neighbors and community organizers say this rise in rent is because of re-development happening at the Jordan Downs Housing Community.

Doug Guthrie, the president of the housing authority for the city of L.A. said there's no secret plan to gentrify the community and move everyone out. Guthrie spoke directly about why Marte's rent has gone up.

"One member of the household had lost their job a year ago, came in and we adjusted their rent downward as a result of that. This year, we reviewed their income again and the individual got a new job, the income went up so we adjusted the income and rent upwards," said Guthrie.

The Housing authority conducts an annual review which happened in March. Since then, Marte's hours have been cut by more than half, but reviews are accepted at any time if a family experiences a dramatic change in income.

On Monday, Marte's mother came to the management office to provide them with her son's most recent pay stub and schedule to show he's not getting enough hours, but they told her it was too late for review.

"When they informed the housing authority that they got a new job and their income went up, their rent goes up. If they inform them that they lost hours or lost a job, it takes a long time to get that rent back down so people end up paying more than the 30 percent of their income because of the speed at which the office handles those requests," said Community Organizer Bill Przylucki, who works with public housing communities across Los Angeles.

Marte needs to come up with $400 more a month, and he said he's at the breaking point. He doesn't know what his family is going to do.

"We deserve to be here because we were here through the bad times and we should be here for the good times. We feel like we should be part of the new incoming special things coming to Watts," said Marte.
Report a correction or typo
Related topics:
real estatewattslos angeleslos angeles countyrental propertygentrificationhousinghousing marketrenters
Copyright © 2021 KABC-TV. All Rights Reserved.
More Videos
From CNN Newsource affiliates
TOP STORIES