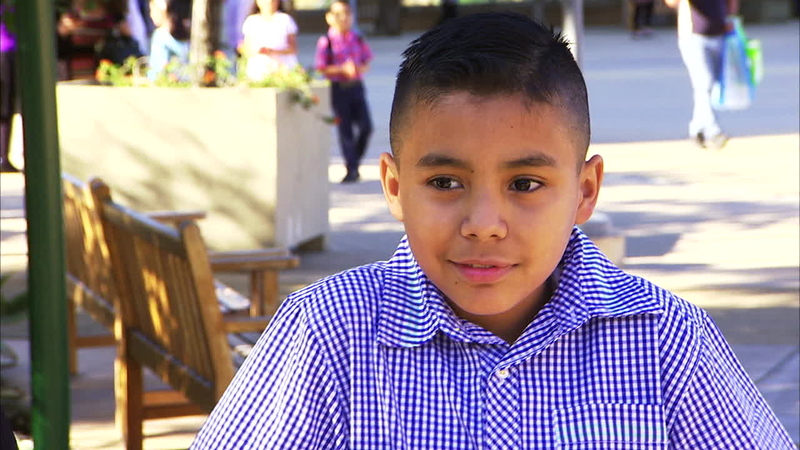 11-year-old Adan explains why he fled his native El Salvador. Much like his mother Roxana, who left the Central American country when Adan was an infant, she was escaping domestic violence, and was forced to leave Adan behind with her sister.

Over the years, Roxana called her son daily, even when he couldn't yet speak she would FaceTime and call so he could hear her voice.

Then when Adan was just 7, he and a relative left El Salvador to travel 1600 miles to the U.S. border, but immigration authorities detained them.

"I cried, I cried...one of the hardest moments in my life," Adan said. "I felt sadness, I felt guiltiness, I felt anger, and I felt like all the negative feelings. I wanted to be beside my mom and I lost hope."

Roxana worried her son would fall into the grip of brutal gangs if he didn't escape. So once again the young boy -- this time 8 years old -- tried to cross the border, but failed a second time.

Finally, two years ago, Adan agree to make a third attempt. He set off on the long and dangerous trek with an adult and this time made it to the U.S. border in Texas, at the Rio Grande.

He was among a handful of children and they were instructed to throw their mobile phones, which they used to communicate with their parents, into the river.

"As they were saying that the instructions, I was texting to my mom," Adan explains.

"I sent her an emoji that has hearts and I told her that I'll be okay... If God wanted I would pass the river. And that was the most emotional moment because she sent me a message the moment I turned it off and I didn't have time to read it all."

Roxana says she put Adan in God's hands, and waited. Two days later, she received a call from immigration authorities that her son was in the U.S.

Now 11 years old, Adan lives with his mother, stepfather, and baby sister. He's seeking Special Juvenile Immigrant status to stay in the country. The U.S. passed law in 1990, grants special status to children who have been abandoned, abused or neglected by one or both of their parents in their home country.

So while Adan waits for what could be a long process, he's going to school and not taking a single second for granted with his family. And despite all he's been through, Adan is resilient and holds on to hope for a better future.