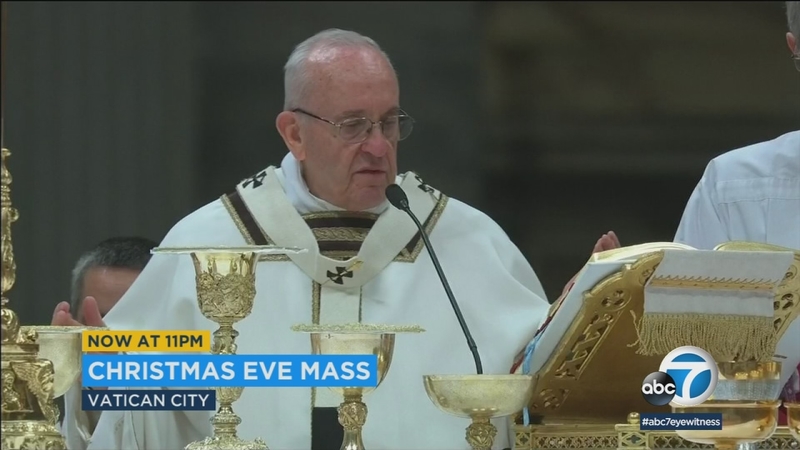 Pope Francis in Christmas Eve remarks Sunday likened the journey of Mary and Joseph to Bethlehem to the migrations of millions of people today who are forced to leave homelands for a better life, or just for survival, and he expressed hope that no one will feel "there is no room for them on this Earth."

Francis celebrated late evening Christmas vigil Mass in the splendor of St. Peter's Basilica, telling the faithful that the "simple story" of Jesus' birth in a manger changed "our history forever. Everything that night became a source of hope."

Noting that Mary and Joseph arrived in a land "where there was no place for them," Francis drew parallels to contemporary time.

"So many other footsteps are hidden in the footsteps of Joseph and Mary," he said in his homily. "We see the tracks of entire families forced to set out in our own day. We see the tracks of millions of persons who do not choose to go away but, driven from their land, leave behind their dear ones."

Around Southern California, the Archdiocese of Los Angeles marked the holiday with masses in English and Spanish at the Cathedral of Our Lady of the Angels.

The Archdiocese of Los Angeles marked Christmas Eve with masses in English and Spanish at the Cathedral of Our Lady of the Angels.

On Christmas Day, masses with Archbishop Jose Gomez are scheduled at the cathedral for 8 a.m. and 10 a.m. in English and 12:30 p.m. in Spanish.

Los Angeles County also held its annual holiday celebration, with choirs singing, in addition to dancing and other performances.