KABC
VENTURA COUNTY (KABC) -- The Ventura County Sheriff's Office responded after a Muslim woman filed a lawsuit against the agency over the removal of her hijab while she was in custody last year.

Jennifer Hyatt announced Wednesday that she was suing the department over an incident that happened while she was being booked on suspicion of domestic violence in January 2017.

In her lawsuit, she claims the hijab was removed from her head, that she was not allowed to wear it while she was in custody, and that she was treated poorly and shamed for her religious beliefs by deputies.

The office released a press release that stated on Jan. 1, 2017, deputies saw Hyatt jump out of a car on Thousand Oaks Boulevard. A deputy then headed to the scene and conducted an investigation that was recorded on a body-worn camera.

After the investigation, Hyatt was arrested and taken to Ventura for booking.

While she was being booked, deputies searched and took items that detainees could use to possibly hurt themselves or others away. Those items include shoelaces, belts and scarves because they could be used as a strangulation device, according to VCSO.

The agency said the interaction between Hyatt and deputies was caught on the jail's camera system, which showed female deputies removing Hyatt's hijab. The VCSO said the deputies' intentions and circumstances surrounding the removal are different from what Hyatt claims.

The office said deputies were "respectful, patient and gentle." It also said Hyatt's hijab was removed so that a nurse could check for any injuries she may have suffered when jumping out of the vehicle.

Authorities also said that audio from the surveillance footage does not indicate that Hyatt requested to wear her hijab.

"However, we do accept her assertion that the request was made, and ultimately denied due to security concerns," the office said. "We believe the removal of her hijab was legal for the safety and security of the jail."

But the agency goes on to say that under its Religious Land Use and Institutionalized Persons Act, the deputies "should have offered an accommodation and we did not. This practice has been rectified."

Attorneys for Hyatt said Wednesday that they were looking for compensation for their client as well as changes to the department's policy.

"The sheriff's office respects the religious beliefs of all people in the community," the agency said in a press release. "Our goal has been, and continues to be, to provide a safe environment for those entrusted to our care. This includes Ms. Hyatt, who was only in our custody for a few hours."
Report a correction or typo
Related topics:
religion & spiritualityventura countyarrestmuslimsjaillawsuitventura county sheriff's departmentsurveillance video
Copyright © 2020 KABC-TV. All Rights Reserved.
RELATED 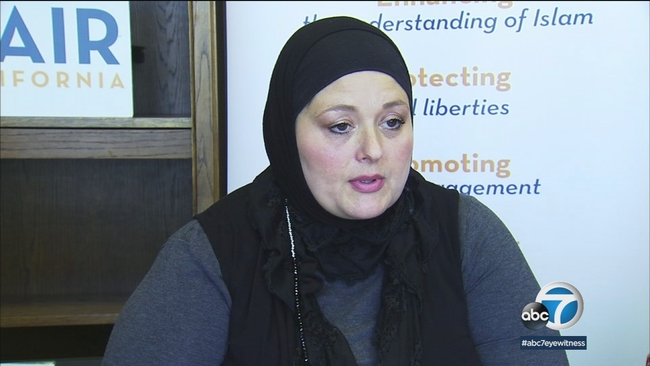