Thousands of requests for 'detainers' not honored by LA County authorities, ICE says 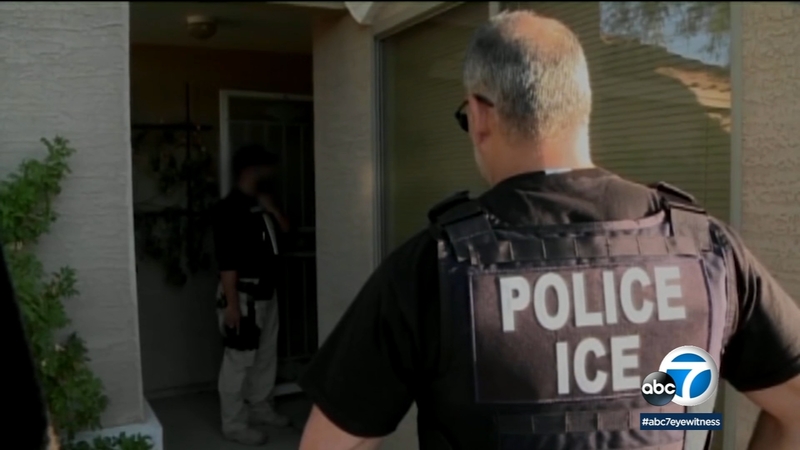 At a Thursday press conference, ICE officials disclosed a number of cases, which they said involved a number of people who were released from jail despite requests that they be held. The crimes include grand theft auto, drug trafficking and parole violations.

Shane Matthew Russell was in jail convicted of child cruelty and he was also living in the U.S. illegally.

Russell was released out into the public by the Los Angeles County Sheriff's Department, despite a request from ICE officials to detain him.

"These non-cooperative jurisdiction's sanctuary policies are protecting these criminal aliens," said David Marin, the head of ICE in Los Angeles.

Marin said this is just one of thousands of requests that are routinely declined by local authorities.

So far this year, ICE officials say they've requested 11,000 detainers from the Los Angeles County Sheriffs Department. Only 500 of those have been honored.

So-called "detainers" are a common method of finding and arresting people who are known to be in the country illegally. The process involves agreements between ICE and local jails across the country to hold people arrested on crimes so ICE can look into their status.

"When detainers are not honored, ICE must go in the community to apprehend these individuals before they harm anyone else," Marin said.

Supporters of so-called sanctuary laws argue that they are not preventing ICE from doing its job.

"We are not stopping immigration enforcement from occurring. We allow ICE to do everything they legitimately can and should do. We don't stop them. We just don't do their work for them," said California Attorney General Xavier Becerra.
Report a correction or typo
Related topics:
los angeles countysanctuary citieslos angeles county sheriff's departmenticeimmigration
Copyright © 2021 KABC-TV. All Rights Reserved.
TOP STORIES
How do new CDC guidelines affect SoCal?
CDC reverses course on indoor masks in some parts of US
1 killed, 1 wounded in shooting at Corona movie theater
Ed Buck found guilty in West Hollywood meth overdose case
Walmart will cover 100% of college tuition for its workers
CSU to require all students, staff to get COVID-19 vaccine
Arrest made in fatal shooting of Rite Aid clerk in Glassell Park
Show More
Tenants of Caltrans-owned homes in El Sereno upset with SB51
OC congresswoman introduces Kobe Bryant Day resolution
Bay Area teen attacked by crocodile while vacationing in Mexico
Video: Dog thrown from truck in West Hills crash
OC restaurant requires customers to prove they are not vaccinated
More TOP STORIES News