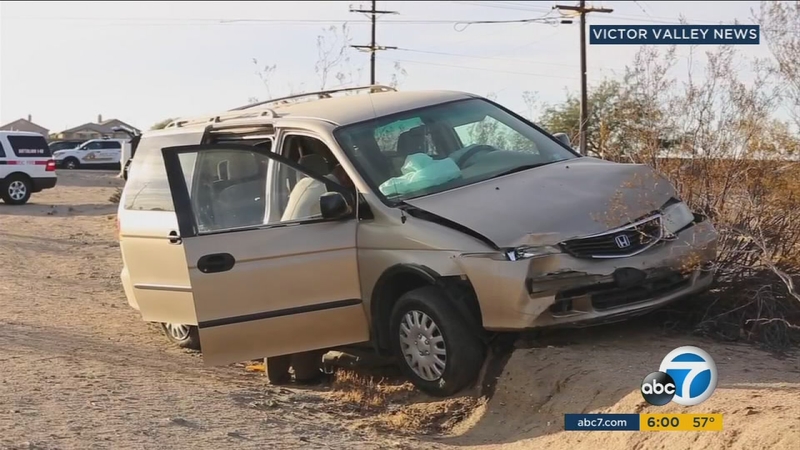 RIALTO, Calif. (KABC) -- Authorities arrested five men and two teens who led authorities on a chase through multiple freeways after the suspects were involved in a drive-by shooting of a home in Rialto Wednesday afternoon.

The incident happened around 2:50 p.m. when a Fontana officer was in the area of Tamarind and Baseline avenues. A drive-by shooting occurred at a home in Rialto in the 1200 block of Tamarind Avenue, police said.

A boy said he was sitting near the kitchen table when he heard bullets flying through the home. He said he was lucky that his grandmother was there to save his life. The residents had no clue why the home was targeted.

When the officer found the car, police noticed multiple suspects were inside the white 2014 four-door Toyota Corolla. They attempted to pull the suspects over, but a chase ensued.

During the chase, a detective patrol unit was involved in a crash with a civilian's car. The civilian was evaluated at the hospital over complaints of pain, and the detective was unharmed. The group eventually pulled over and were all taken into custody.

Police identified the suspects as Philip Alcala, 18, Agustin Ahumada, 18, Joshua Acosta, 18, Michael Ramirez, 18, Thomas Ramirez, 18, and two boys ages 15 and 17. The adults were booked at the West Valley Detention Center, while the teens were placed in juvenile hall.

Authorities believe all of the suspects are active members in a local street gang.

Anyone with more information is urged to call the Fontana Police Department at (909) 350-7700.