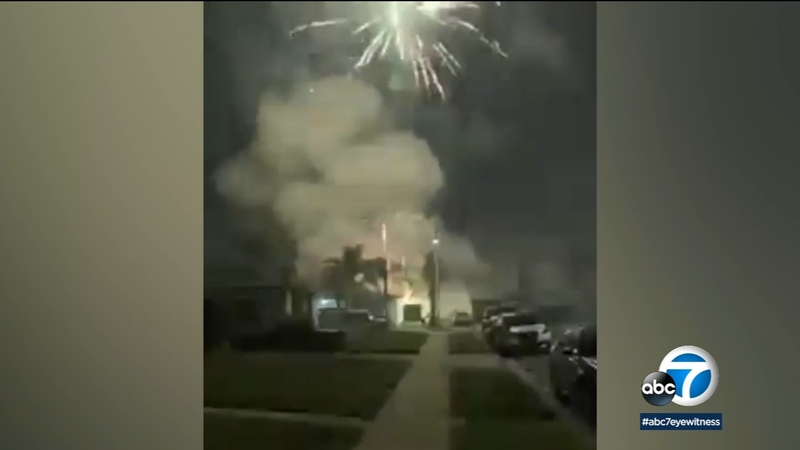 RIALTO, Calif. (KABC) -- It looked like a war zone. Video posted on Facebook by Everything San Bernardino shows explosions and people running away.

One neighbor, who wouldn't go on camera, said she didn't know what was happening.

"All of a sudden, I was sitting in my living room and I see all these light and I think that was the fireworks just sparking off," said the neighbor.

Fireworks could be seen several blocks away. It happened at a home on N. Chestnut Avenue in Rialto. Police say they are aware of these videos as they conduct their investigation. They say they found large amounts of illegal fireworks in the backyard.

"We did find multiple detonated fireworks as well as some illegal fireworks that had not been detonated yet so the fire department did take over those that were not detonated," said Natalie Aguirre from Rialto police.

ABC7 went to the home. Within minutes, someone came out and confronted us on the street. A man who refused to tell us who he was threatened us and told us to leave.

He refused to tell us anything about the fireworks or why there were in the house.

Bursts of light, bangs and thundering booms from non-stop barrages of Fourth of July fireworks lit up the skies across the Los Angeles area Sunday night.

Police say the explosion was strong enough it caused some structural damage.

"We had our community compliance go out yesterday to assess the home and any other homes in the area that were made to see the damages that were made," says Aguirre.

Police say they were lucky: there were no reported injuries with this incident. But they plan to file charges against the suspect and say this shows how dangerous these fireworks can be.