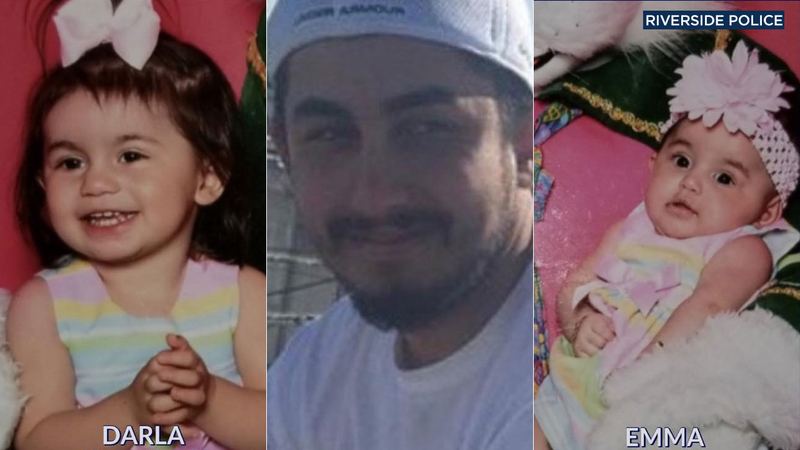 RIVERSIDE, Calif. (KABC) -- A search is underway for two sisters, ages 18 months and 8 months, who police believe were possibly abducted by their mother's live-in boyfriend in Riverside.

Riverside police said it all began with a verbal and physical domestic altercation between the mom and the boyfriend that occurred Tuesday between 9 p.m. and 10 p.m. at their home in the 3100 block of Grace Street.

Authorities said the mother put her two girls to bed and temporarily left the residence. When she returned around 11 p.m., her girls were gone, and so was her boyfriend.

Investigators arrived on scene and determined that the boyfriend, identified as 24-year-old Joshua Adle, had taken the children without their mother's consent. Adle also took the children's legal identification documents, authorities said.

"She received some text messages from the boyfriend," said Ryan Railsback, a Riverside police spokesman. "They're a little bit concerning to us, as to his intent to take the kids."

Investigators believe Adle may be traveling to the state of Michigan with the two girls.

The children have been identified as 18-month-old Darla Yonko and 8-month-old Emma Yonko.

Darla is described as Hispanic , about 2 feet 6 inches tall, weighing 30 pounds with brown hair and brown eyes. She was last seen wearing a long-sleeved "footie pajamas" with purple hearts.

Emma is described as Hispanic , about 2 feet tall, weighing 18 pounds with brown hair and brown eyes. She was last seen wearing a long-sleeved "footie pajamas" with white and yellow lemons.

Adle is described as Hispanic, 5 feet 9 inches tall, 170 pounds with black hair, hazel eyes, mustache and a thin beard. He was last seen wearing a dark colored sleeveless T-shirt. He may be traveling in a blue 1982 Cadillac four-door vehicle with a white top, stock wired spoke wheels with thin white walled tires. The car is missing its license plates.