For those heading to voting centers in Riverside County on Election Day, you may be pleasantly surprised as many polling places are seeing little to no lines.
KABC
By Rob McMillan 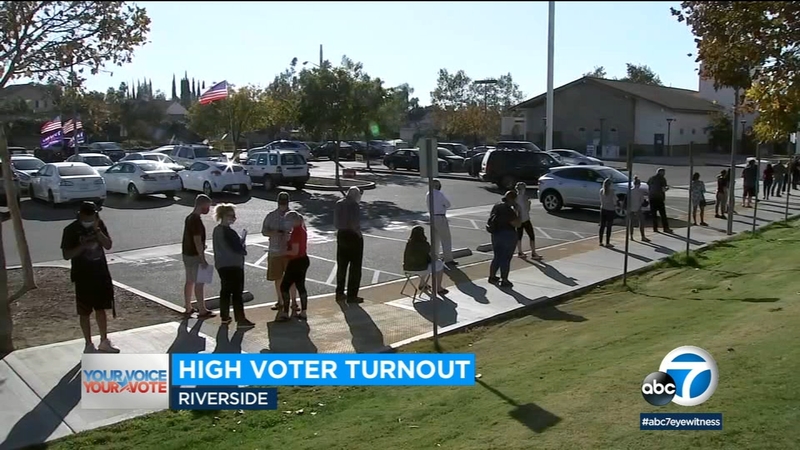 RIVERSIDE, Calif. (KABC) -- In Riverside County, a handful of polling places were starting to see long lines by the afternoon and early evening on Election Day.

In the morning, most polling places were fairly slow with no lines. But by late afternoon, the registrar's office determined that at least five locations were busy enough that they needed extra machines brought in.


The lines were not the result of any glitches, elections officials said.

"The information we got back was that voters were simply taking longer on the electronic voting machines," said Riverside County Public Information Officer Brooke Federico.

At places like the Orangecrest community center in Riverside, dozens of voters could be seen standing patiently outside in a line stretching around the parking lot. And at the county registrar's office, there was a long line of cars waiting to drop off their mail-in ballots in person.

It's a contrast to some of the issues the county saw during early voting over the weekend when glitches were causing delays at some locations.

Officials say many people in the county took advantage of early voting, which may be contributing to the lower turnout on Election Day itself.


"One thing that's is important to note is that for this election, we had all 130 voter assistance centers open on Saturday, Sunday and yesterday, so there's a lot of early voting that has happened," Federico said.

The county has already received 52% of mail-in ballots, according to officials.

"At this point, we have record-breaking turnout compared to early voting in prior elections," Federico said.
While there are fewer polling places in the county this year, all have been open since Saturday, so there have been more opportunities to vote.

However, only about 5% of the votes cast as of Tuesday morning were made in-person. The rest were mail-in ballots. But by noon, more people had voted on Tuesday than had cast ballots all day on Monday at the early voting centers.


In San Bernardino County, elections officials say voting at the registrar's office got so busy that physical distancing was a concern. An overflow polling place was opened at the airport. A spokesperson said even with the long lines, voting only took about 15 minutes.

Perris resident Jennifer Day said for her, voting on the presidential race was the priority.

Day said she never received her mail-in ballot, which was possibly sent to an old address. So she voted in-person.

"It was important for me because my boys were pushing it, first of all. Also, I want to be a part of what's going on. I can't complain about something if I'm not helping to make the change," Day said.

The Riverside County registrar's office told Eyewitness News if someone tried to vote with Day's missing mail-in ballot, the signature would be checked and thrown out. It could also be voided now that Day has told election officials that her ballot may have been sent to an old address. There could be potential charges, including fraud, brought against someone who tries to cast another person's ballot.
Report a correction or typo
Related topics:
politicsriverside countyelection dayvote 2020election
Copyright © 2021 KABC-TV. All Rights Reserved.
TOP STORIES
LAUSD to require COVID-19 testing for all students, staff
CDC document warns Delta variant spreads as easily as chickenpox
Garcetti signs plan to restrict homeless camps
Lakers to acquire Russell Westbrook, ESPN reports
Man beaten outside NoHo hookah lounge says attack was a hate crime
Great Park dropping reference to Orange County in its name
Dodgers finalizing deal to acquire Scherzer, Turner
Show More
TSA teaching airline workers to defend themselves
Mother, infant ejected from vehicle in Torrance crash
Video: Fight breaks out on 60 Freeway in Ontario after crash
How to convince someone to get the COVID-19 vaccine
Downtown LA venues welcoming back concert fans
More TOP STORIES News