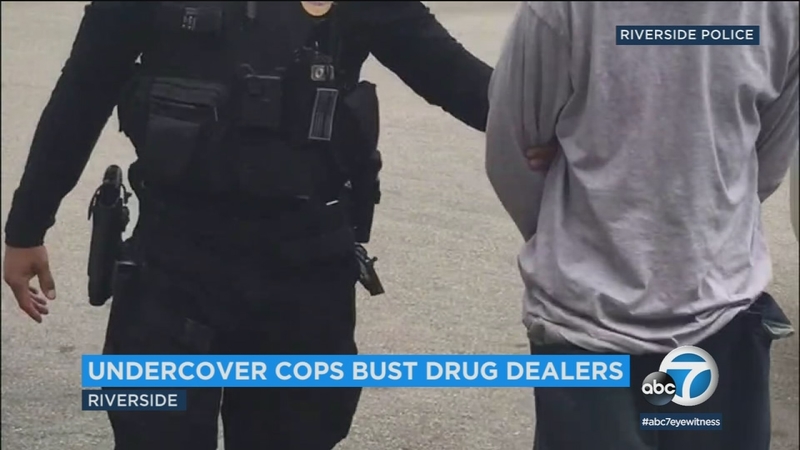 RIVERSIDE, Calif. (KABC) -- Downtown Riverside is known throughout Southern California for its iconic festival of lights during the holidays.

But Riverside police are fighting to make sure the area doesn't become known for an area riddled with illegal drug sales.

Tuesday, the Riverside police department announced the results of a three-month narcotics operation, in which undercover officers would buy illegal drugs from drug dealers.

A total of 23 arrests were made late last week during a warrant sweep. Police say all the suspects are now facing felony charges.

They say the operation was a direct result of complaints made by city residents and business owners, not just in the downtown area, but the Magnolia Center and La Sierra. Authorities say the suspects were attempting to sell hard drugs to the undercover officers, not marijuana.

Police say most of the suspects arrested have prior criminal records. One of the suspects was on active parole for attempted murder. Another suspect allegedly sold drugs to undercover officers, just two hours after being released from jail on other charges.

Diaz says it illustrates frustrations he has with other aspects of the criminal justice system.

"When someone is on supervised release, the expectation is that they will refrain from committing further crimes," said Diaz. "When you hear a story like this, where a guy is out for two hours and is slinging dope, it is somewhat demoralizing."
Report a correction or typo
Related topics:
riversideriverside countyillegal drugsdrug arrestdrug bust
Copyright © 2021 KABC-TV. All Rights Reserved.
More Videos
From CNN Newsource affiliates
TOP STORIES