Retired Marine helps woman, 2 children get to safety as their car is hit by gunfire during Riverside shootout 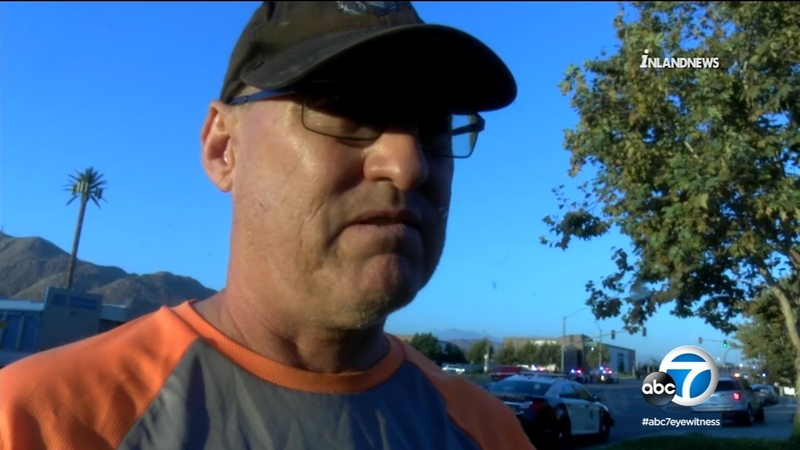 RIVERSIDE, Calif. (KABC) -- A retired Marine is recalling the moment he helped a family to safety during a gun battle that left a California Highway Patrol officer and a suspect dead in Riverside Monday.

Charles Childress had only moments to react after seeing a bullet pierce the windshield of the car in front of his. A mother and her two children were inside that vehicle.

"The bullet went through her windshield and through her car, and then that's when I heard the kids screaming," said Childress, a retired Marine.

The incident occurred when a CHP officer conducted a traffic stop of a suspect in a GMC pickup truck around 5:35 p.m. in the area of Box Springs Boulevard and Eastridge Avenue, near the 215 Freeway, police said.

A gun battle ensued and a CHP officer and a suspect were killed, officials said. Two other officers were injured.

Childress didn't stop to think about his own safety during the incident. Shots were still being fired when he helped rescue Jennifer Moctezuma and her 6-year-old twins from their car.

"The bullet went straight in the middle of my windshield, missing my head and my two kids. They were in the back," said Moctezuma.

With bullets flying as the shootout between a gunman and CHP officers continued, Childress risked his life, jumping out of his car and running to the family's car.

"I grabbed the two kids, and I put them to the side of the car, hid them behind the engine block of the car. It's the only protection, so there were still rounds being fired, there was gunshots being fired between the officers and whoever was up there.

"So, I waited for a lull in the shooting, and I brought them from their car to my car and we had a couple more ricochets pass us," Childress said.

As more deputies arrived, Childress was able to guide Moctezuma and her kids to safety behind police lines.

Childress credits his service in the Marine Corps for helping him spring into action to protect the family.