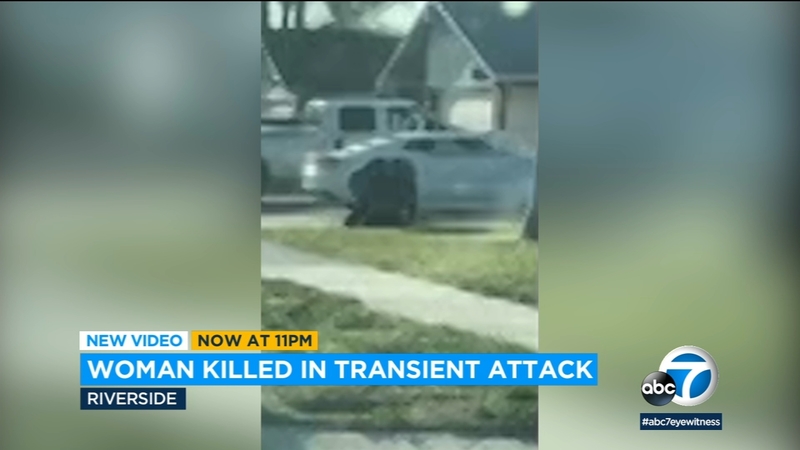 RIVERSIDE, Calif. (KABC) -- New video shows a murder suspect's arrest after she allegedly stabbed a woman to death at a Riverside neighborhood in what police described as a random attack.

Footage shows officers swarm the 23-year old transient woman to take her into custody for the murder of a 64-year-old woman who was walking her dogs Saturday morning in the La Sierra neighborhood.

Darlene Montoya was later booked for murder, weapons violation and suspicion of being under the influence of an illegal substance.

At the time of the incident, a neighbor, who wasn't aware of the attack, spotted Montoya acting suspiciously. He called police and started recording the video.

A 64-year-old woman was stabbed to death as she walked her dogs in a Riverside neighborhood and a 23-year-old transient woman has been arrested on suspicion of her murder.

He was shocked to find out what had happened and says transients are becoming a growing issue in the area.

"We see them walking around all the time, but never did I think one would just attack somebody and on top of that just kill them in broad daylight," said Ricky Perez.

The victim, who police say was "randomly confronted and attacked" by the suspect, was identified as Ke Chieh Meng. She was taken to a local hospital with stab wounds to her abdomen area and later succumbed to her injuries.

Less than a week ago, Montoya was arrested on suspicion of assault with a deadly weapon in another attack, but was released from custody due to COVID-19 protocols.

She's now being held without bail.