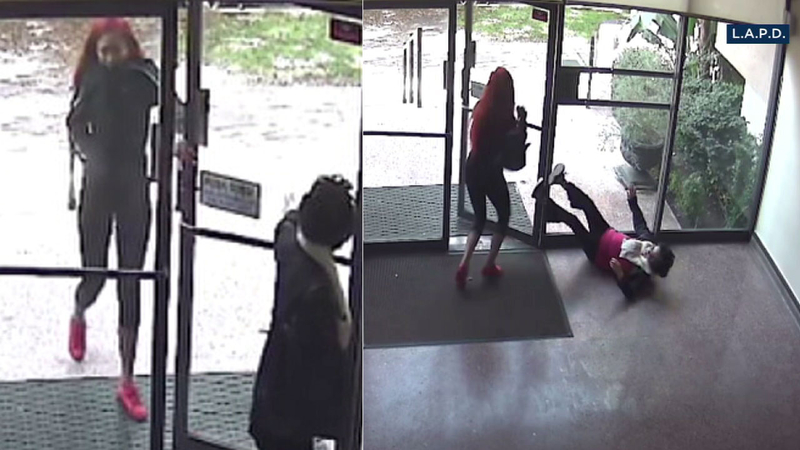 KOREATOWN, LOS ANGELES (KABC) -- Police are looking for a woman caught on video grabbing a purse from a 78-year-old woman and pushing her to the ground in Koreatown.

The video shows the suspect following the victim into the front lobby of her apartment building. She approaches the victim from behind and grabs the purse off her shoulder.

The victim fights back and tries to block the suspect from leaving the building. But the younger woman pushes her away, making her fall to the ground.

The victim appeared to not be seriously injured in the robbery, as she is seen standing up and walking out of the building after the suspect, who was able to get away.

Detectives said while the woman only suffered minor injuries to her back, she and her husband were visibly distraught while recounting the story.

"They were shaking when they were talking to me. I would have to assume that she was traumatized, but she was thankful that she was not injured any further," Detective Daniel Chi said.

Police described the suspect as an African-American woman, about 20 years old, with red hair. She is about 5 feet 8 inches tall and weighs around 140 pounds. She was seen wearing a black sweater with white stripes on the sleeves, ankle-high black pants and pink tennis shoes.

Authorities believe she targeted the victim because the woman was elderly and alone.