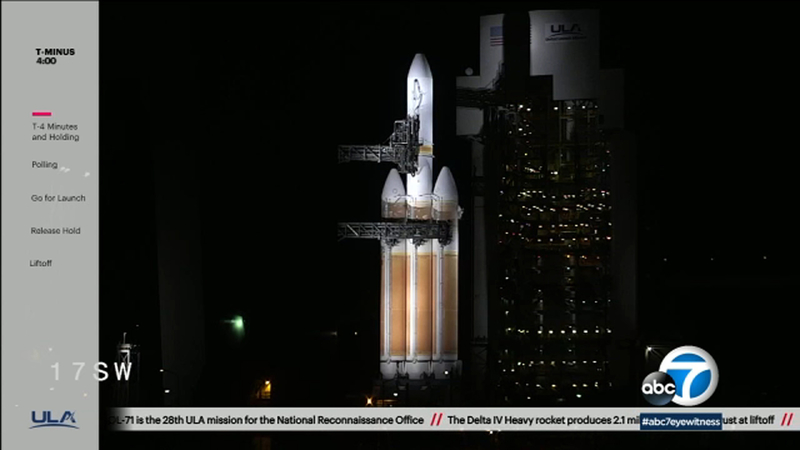 VANDENBERG AIR FORCE BASE, Calif. (KABC) -- Just minutes before a scheduled liftoff from Vandenberg Air Force Base, the launch of a classified satellite for the National Reconnaissance Office was scrubbed once again Wednesday night.

Liftoff was set for 5:44 p.m. and then moved to 5:49 p.m. until the United Launch Alliance declared a scrub less than 10 minutes before takeoff. There was talk about the buildup of hydrogen around the base of the rocket before the scrub was announced.

Launch Alert: we have declared a scrub for today's launch of the #DeltaIVHeavy. We will set up for a 24 hour recycle and the next launch attempt will be 12/20 at 5:31pm PST.

That launch had been delayed three times before that, including Tuesday, when high-ground winds forced a postponement.

Launches from Vandenberg, especially those carried out after sundown, typically create impressive aerial light shows over Southern California and the southwestern United States.

The Delta IV Heavy rocket will be carrying a secretive satellite for the U.S. National Reconnaissance Office.

According to the company, the Delta IV Heavy rocket includes three Rocketdyne liquid hydrogen/liquid oxygen engines that can produce a combined 2.1 million pounds of thrust.