The Rolling Stones return to Rose Bowl with No Filter tour 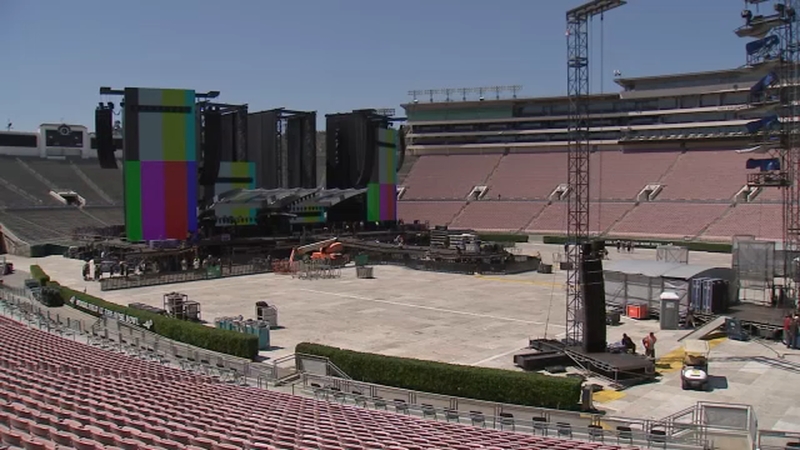 PASADENA.Calif. (KABC) -- You can't always get what you want, but don't tell that to Southland Rolling Stones fans, because the legendary rock group is returning to Pasadena.

The Rolling Stones are bringing back their hugely successful No Filter tour to stadiums in 13 cities across America in 2019 with a stop at the Rose Bowl on Aug. 22.

The last time the Rolling Stones played at the venue was in 1994, making this visit the 25th anniversary of the last Stones concert.

This time around, the stage represents a technological advance that puts more focus on the Stones themselves, says Dale Skjerseth, the tour's production director since 1994. The new stage design is streamlined with four six-story-tall LED video screens, delivering super high-def footage of the band.

Each tour stop requires four days of setup, but the Rose Bowl setup was the quickest - taking a little more than two days to finish. Overall, about 300 people - 150 local workers and 150 who travel with the tour - help with the production, Skjerseth says.

"People should expect a fantastic show ... they are the Rolling Stones," said Skjerseth.

The No Filter tour started in 2017 but was abruptly canceled due to a health scare for Mick Jagger. But with the energy of a man more than half his age, Jagger bounced back from heart surgery.

Tickets sold for the original date will be honored, which means fans do not need to exchange their tickets. Those who cannot attend the rescheduled date can refund their tickets by accessing their Ticketmaster account.
EMBED More News Videos