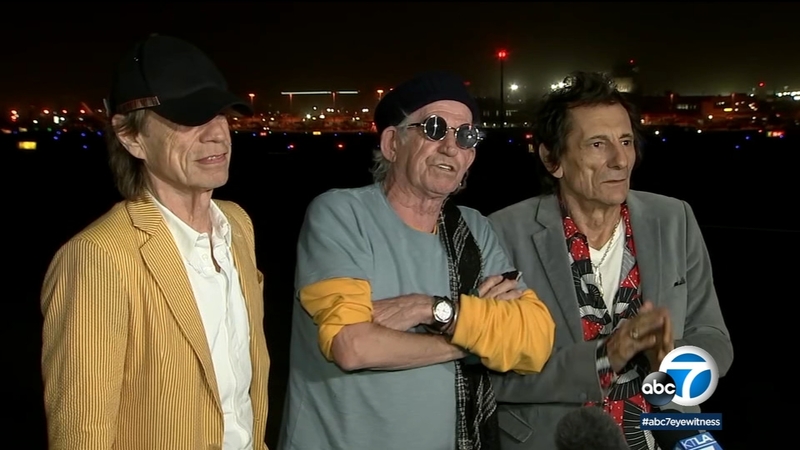 BURBANK, Calif. (KABC) -- This airport arrival press opportunity is reminiscent of the old days of rock 'n' roll. The Rolling Stones were there then, and now, almost 60 years later. The legendary band arrived at the Burbank airport Monday night.

The band members are excited to be on stage again after a long break due to the pandemic.

"It's great to be out doing it again and I think the audiences are pleased to be out and having fun and enjoying themselves," said Mick Jagger.

The Rolling Stones say being on the road again without their drummer, the late Charlie Watts, hasn't been easy.

"But also a pleasure in that we do have, I think, the only other guy in the world that can pick it up from Charlie and recommended by Charlie himself, Mr. Steve Jordan," said Keith Richards.

The band will take the stage at SoFi Stadium for two nights, Thursday and Sunday.

"The next couple of days, we're going to get ready. We're going to rehearse and after we've done the two shows, though, then we can relax," said Jagger.

Six television crews were invited to the airport press event to each ask one question. I essentially said goals keep people going and and asked what their goals were in music or life.

"It's a lot for the airport," said Jagger. "We could sit down, but, you know, the short term goal is to do this."

"No, brother, we're just trying to make the next (expletive) gig, all right?" said Richards, laughing.

"As Keith so succinctly said, to get through this tour!" said Jagger.

If you'd like to see The Rolling Stones, tickets are still available for Thursday's show at SoFi Stadium.