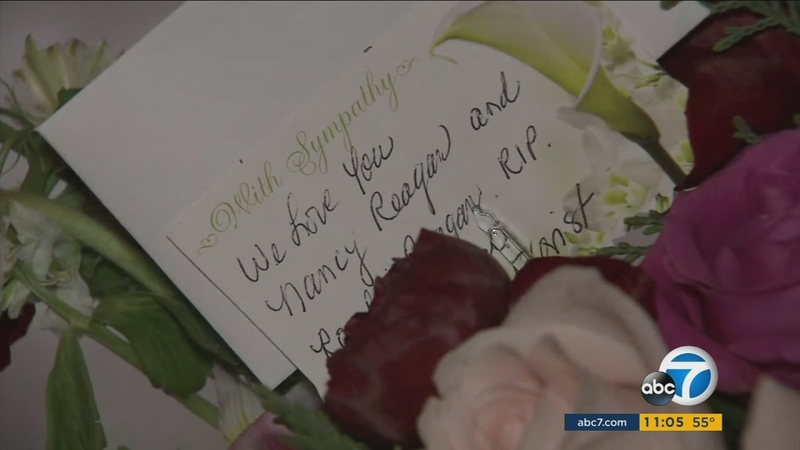 SIMI VALLEY, Calif. (KABC) -- Former first lady Nancy Reagan was being remembered on Sunday outside the Ronald Reagan Presidential Library in Simi Valley, where she will be laid to rest.

Those who went to pay their respects remember Nancy as a first Lady devoted to fighting substance abuse and a devoted wife to her husband, Ronald, of 52 years.

"For me, it's a bittersweet day. I'm sad about the passing of Mrs. Reagan, but I'm very happy she's reunited with her husband" said Wendy Armstrong of Moorpark.

Charlie Winn took his son to the library to teach him about the beloved couple's legacy.

"She was the president's closest adviser and so I would give her credit for many of the great things that, in my opinion, the president contributed to this country," he said.

People hoping to spend the day at the Ronald Reagan Presidential Library were only able to leave flowers in memory of Nancy Reagan.

The library was closed and will remain that way for the rest of the week while plans are put in place for the former first lady's funeral. Trucks were seen arriving with equipment that will be used to build a stage for the service that is expected later in the week.

According to plans laid out in 2014, her body will remain at the mortuary for three to four days. Only close family and friends will be allowed to visit, then Mrs. Reagan will lie in repose at the Reagan Library.

Details on a finalized date and time were not immediately released, but sources at the library said about 1,000 people, including heads of state, former presidents and other dignitaries, will be invited to the service.

John Heubush, executive director of the Reagan Library, said there will even be an opportunity in the coming days for those in the public who would like to pay their respects and see Nancy's coffin at the library.

Nancy Reagan said farewell to her husband in 2004. It was two years ago, on the 10-year anniversary of his death, she laid a wreath at his grave. And soon enough, Nancy will be laid to rest by her husband's side.

In lieu of flowers, a spokesperson for the former first lady had requested that people make contributions to the library and its foundation at www.reaganlibrary.com.