Melissa Ortiz was in the army for almost eight years and is now an executive chef at Rose Park Roasters on Pine Ave.
KABC
By Jaysha Patel 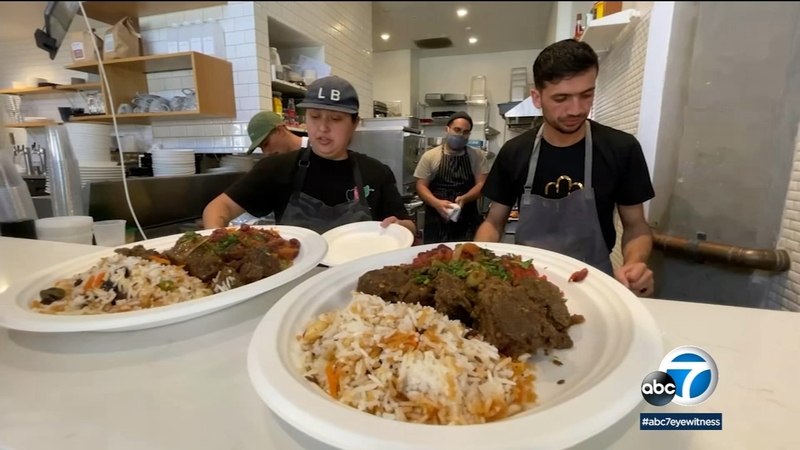 On March 13 she decided to make Afghan food which included Lamb Dopiaza, vegetable curry, potato Bolani, Pulao and Lubia, which is also known as a kidney bean curry.

Ortiz says she worked on finance while in the army. Now, she's an executive chef. Her travels around the world sparked her love for food.

She moved to Long Beach in 2011 when she left the military, but went back to Afghanistan and was a chef at the United States Embassy from Jan. 2020 to May 2021. While she was there, she made two good friends. They decided to visit Ortiz in Long Beach which sparked the Afghan food menu at Rose Park, which the three cooked together.

"I was working in Afghanistan for five years in the U.S. embassy as a cook. and now we came from Afghanistan to serve Afghani food in California," said Jawad Mohammadi, Ortiz' friend.

Customers say the Afghan food they cooked was full of flavor.

"It's delicious. It's full of spices. One of the very first things that I noticed is when we were across the street, the smell just hit me, and now that I taste it, it tastes just like it smelled," said Mario Sprengelmeyer, a customer.

There are a few Rose Park locations, but Ortiz says the one on Pine Ave. is the only one that serves food. If you stop by you'll get a taste of her other dishes.

"We focus on vegetables and seafood, locally sourced, so the menu changes often based on the weather conditions and what's available," said Ortiz.