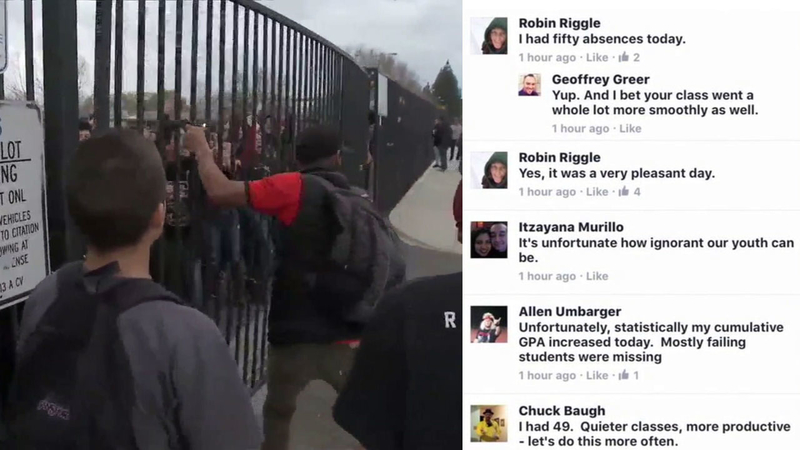 RIVERSIDE, Calif. (KABC) -- Six faculty members at a Riverside high school are on paid leave for online comments mocking students who participated in the "A Day Without Immigrants" boycott.

The protest took place on Feb. 16 nationwide as immigrant students stayed out of school and employees stayed home from work as a demonstration against President Donald Trump's more aggressive immigration enforcement agenda.

Afterward, several teachers at Rubidoux High School in Jurupa Valley posted comments online, later deleted, that mocked the students and said the school was better in their absence.

One teacher called the protest "an excuse to be lazy and/or get drunk" and called it the "Best school day ever."

Another said his class GPA improved in the protesting students' absence, while others said the "trouble makers were gone" and the cafeteria was cleaner.

At least one teacher later apologized for his disparaging remarks but students say the damage has been done.

"I never thought they would act like that," student Emily Diaz said. "In class they don't seem like that. They're always trying to help us and support us. But I guess their true colors came out in social media."

The teachers were later placed on paid leave while the district considers disciplinary action.