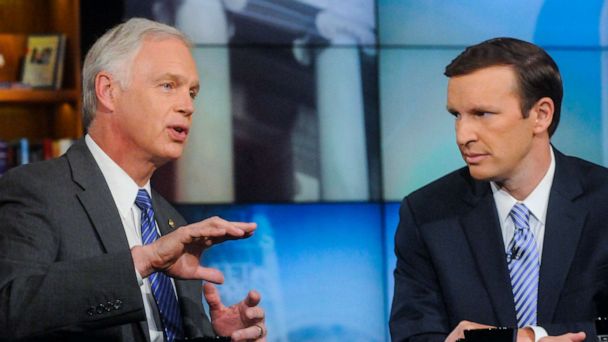 Two U.S. senators say that they were denied visas as part of an official delegation to Russia for talks with their counterparts in the country's parliament.

Amid tensions over arms control, human rights, and Russian aggression in Ukraine, Venezuela, and Syria, it's a sign of the frayed ties between Washington and Moscow, despite President Donald Trump's consistent calls for better relations with President Vladimir Putin's government -- including its readmission to the G-7.

Republican Ron Johnson of Wisconsin and Democrat Chris Murphy of Connecticut were scheduled to leave on their trip next week, according to aides, with stops in Ukraine, Kosovo, and Serbia as well.

The Russian government denied that there were plans for any talks and said Johnson never applied for a visa, but also blamed the U.S. for barring Russian lawmakers from traveling to America.

Sen. Mike Lee, R-Utah, was also part of the planned delegation, but he was not denied a visa and plans to travel as scheduled, a spokesperson told ABC News.

The Russian Foreign Ministry informed the U.S. embassy in Moscow that the two senators would be denied visas, and the embassy emailed the lawmakers' offices, according to a source familiar with what took place.

Johnson first revealed he was denied late Monday, saying in a statement, "I had hoped direct dialogue with Russian parliamentarians could help set the stage for better future relations between our two nations. Unfortunately, Russian officials continue to play diplomatic games with this sincere effort and have denied me entrance to Russia."

Johnson was later joined by Murphy, who said the senators wanted "to maintain dialogue" during "potentially a perilous moment for our two nations' fragile relationship."

But senior members of Russia's parliament, known as the Duma, said there were "no plans" for any meetings and said they knew nothing about any visit.

"Nothing is known at present about the Russian visit of the U.S. Congress' delegation for talks with officials to which Ron Johnson refers," Leonid Slutsky, the chair of the Duma's international affairs committee, told reporters Tuesday.

But Slutsky also said Johnson "must have known that he is blacklisted by Russia. His indignation is completely worthless. Moscow was not the first to impose unlawful restrictions on parliamentarians."

Several Russian citizens and entities are barred from travel to the U.S. under different sanctions for human rights abuses, corruption, or interference in Ukraine or the 2016 election.

A State Department spokesperson told ABC News the agency was aware of reports about Johnson and Murphy's visas, but offered no comment on the decision. The department was "prepared to support planned travel by Senators Johnson and Murphy to Russia... to discuss a wide range of issues affecting relations between the United States and Russia and to assess the prospects for a more constructive relationship," the spokesperson added.

Both Johnson, the chair of the Homeland Security Committee, and Murphy, a senior member of the Foreign Relations Committee, have been outspoken and active critics of Moscow, introducing legislation to penalize it over its incursion into Ukraine, its seizure of Ukrainian sailors and vessels, and the 2016 presidential election interference.

Johnson was granted a visa to visit Russia in 2018, but he and fellow Republican John Barrasso of Wyoming canceled after their Democratic colleague Jeanne Shaheen -- another outspoken critic of Vladimir Putin's -- was denied a visa.

Moscow said at the time that Shaheen had been denied a visa because she was on a "blacklist" created in response to U.S. sanctions.

A group of Senate Democrats, led by Minority Leader Chuck Schumer, D-N.Y., delivered a letter to Trump Tuesday, demanding that he not let Putin's government back into the G-7 until it "undertakes demonstrable actions to show its willingness to behave responsibly both domestically and abroad."

Russia was expelled from the then G-8 in 2014 after its illegal occupation of Crimea, a peninsula in southern Ukraine. During the G-7 this past weekend, Trump repeatedly argued that Russia was only expelled because Putin "outsmarted" former President Barack Obama and that Russia should be readmitted.