Russian police crack down on protests over opposition leader's arrest 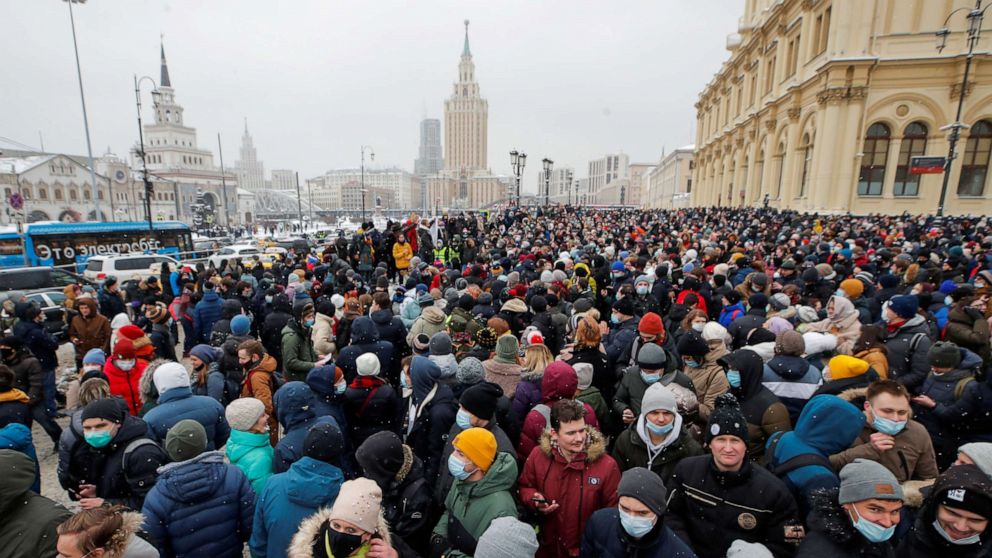 Tens of thousands of people again protested across Russia to call for the release of jailed opposition leader Alexey Navalny and were confronted with a massive deployment of security forces that sought to stifle the demonstrations.

Russian riot police moved to break up rallies, and by evening they had detained over at least 4,400 people, according to a monitoring group that tracks arrests.

The security deployment to counter the protests was one of the biggest seen in years. Ahead of the protest in Moscow, authorities sealed off the city center with hundreds of police and steel barriers and closed some metro stations, effectively shutting down the heart of the capital in a step many residents said was unprecedented.

A week earlier, tens of thousands of people joined protests in dozens of cities across Russia to support Navalny in the largest display of public opposition the Kremlin has seen in years. Police detained over 3,000 people.

This time, authorities appeared determined to send a message by stamping down on the protests. Police in helmets and batons began grabbing people before the demonstrations started, detaining dozens of young people they deemed likely protesters.

In St. Petersburg, hundreds of riot police in camouflage with steel shields moved to blockade protesters, cutting off streets. They advanced, banging their batons against their shields.

In many cities, people walked in peaceful groups, chanting "Putin is a thief" and "freedom." Navalny's allies had called for people not to gather in one place but to just walk around. Police in Moscow sought to disrupt the crowds, and people wandered through the city, with a large crowd eventually reaching the jail where Navalny is held.

Police kept up an almost continuous tempo of arrests, with groups of officers snatching people and carting them into waiting buses, as well as sometimes clubbing people with batons. Police in Moscow and St. Petersburg used stun guns on some demonstrators, which is uncommon in Russia. In some videos, police were filmed shocking protesters who were already detained.

"The main task of the police today to frighten people," Mikhail Birukov, a lawyer who works with the monitoring group OVD-Info, said at a police station where his client had been detained. "The police don't think about law at all," he said.

Like last weekend, the mood of the protests was unusually angry, and while mostly peaceful, demonstrators in a few places scuffled with police.

Because the protests were scattered, it was difficult to judge crowd size, but in Moscow and St. Petersburg they seemed of a similar scale to last week's protests, involving thousands. The threats of arrest and police deployments appeared to have deterred some people, and in regional cities, numbers seemed smaller.

In Vladivostok on Russia's Pacific coast, people gathered on the ice of a frozen bay near the city, dancing in a circle. In Yekaterinburg in Siberia, a crowd of a few thousand marched through the city and at one point walked across a frozen river.

The protests followed a week of crackdown by authorities targeting supporters of Navalny. Police launched a wave of house searches and detentions this week, detaining leading activists as well as Navalny's brother Oleg Navalny. Almost all of Navalny's core team were in detention by the time Sunday's protests began.

A day earlier, police also targeted independent journalists, detaining the editor-in-chief of Mediazona, an outlet that focuses on rights violations by law enforcement. The detention of the editor, Sergey Smirnov, was denounced by other independent outlets as an extraordinary attempt to intimidate media that is critical of the Kremlin.

Navalny himself remains in jail, where he has been held since being arrested two weeks ago on his arrival to Moscow after returning to Russia for the first time since recovering from a nerve agent poisoning.

Navalny, President Vladimir Putin's most troublesome opponent, has built a grassroots following with his video investigations that have exposed alleged corruption among the Kremlin elite.

A new investigation released by Navalny after his arrest claimed to reveal the staggering luxury of a secret palace built for Putin on the Black Sea. The nearly two-hour video has been watched over 100 million times on YouTube, forcing the Kremlin to respond.

This week, journalists from pro-Kremlin media were taken around the palace to show that the interior is still largely a building site. And on Sunday, oligarch and Putin's former judo partner Arkady Rotenberg abruptly came forward claiming the palace was his and it was actually intended to be a hotel.

Navalny is detained on allegations that he violated the terms of an old suspended sentence from a trial in 2014 that found him guilty of embezzlement. The European Court of Human Rights later ruled that sentence was politically motivated.

Authorities have requested that suspended sentence now be converted to real prison time, raising the possibility that Navalny could be behind bars for up to three and a half years.

Navalny's team on Sunday hailed the protests and called for people to come out again on Tuesday at a court in Moscow where a hearing is due to decide whether to jail Navalny.
Report a correction or typo
Related topics:
abc newsnational
Copyright © 2021 ABC News Internet Ventures.
More Videos
From CNN Newsource affiliates
TOP STORIES