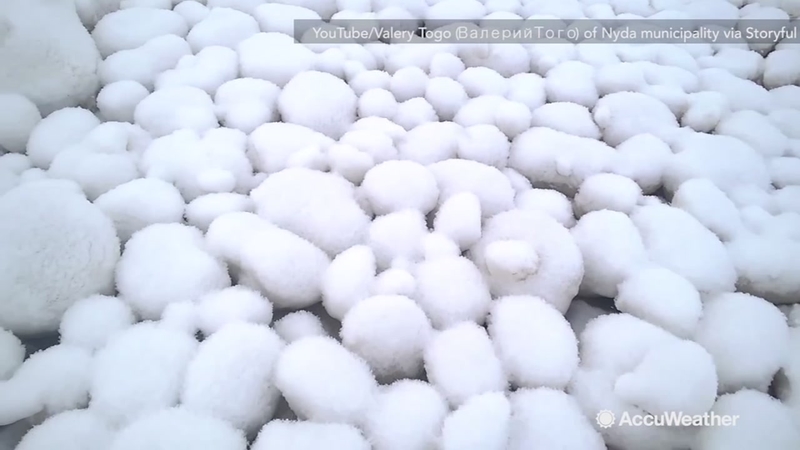 Snowballs have appeared on Russian beaches, but they're not from people prepping for an enormous snowball fight.

These naturally occurring snowballs are created when small pieces of ice form, then are rolled by wind and water into balls of snow. In the video from AccuWeather, it appears there are thousands of snowballs scattered 11 miles across the beach, ranging in size from just a few inches to 3-feet in diameter.

These snowballs have formed before, such as in Michigan the past two winters, but it is a rare occurrence. However, it is a first for many people in Russia, who have never seen such an event before.

They won't make for a great snowball fight, however, since they are made of ice and wouldn't feel very good. Since they're on the beach, the snowballs are also filled with sand and slush, even more of a reason to look and not touch.
Related topics:
weatherdistractionaccuweatherbuzzworthyrussiasnowwinterwatercoolerscience
Copyright © 2022 KABC Television, LLC. All rights reserved.
TOP STORIES
Blink-182's Travis Barker reportedly hospitalized in LA
Father, 10-year-old son found dead next to car in Chatsworth
Shooting suspect barricaded inside South LA apartment complex
FTC sues Walmart over scammers' use of money transfer services
Giuliani associate to be sentenced for violating campaign finance laws
Source of mysterious lights over San Diego identified
Biden administration plans to send out thousands of monkeypox vaccines
Show More
California gun owners' personal information exposed in data breach
Migrants in search of a better life continue to die on their journeys
SoCal woman opens home to women from other states seeking abortion
Carbon monoxide killed 3 tourists at Bahamas resort, police say
Woman dies after being shot on 710 Freeway in Long Beach
More TOP STORIES News