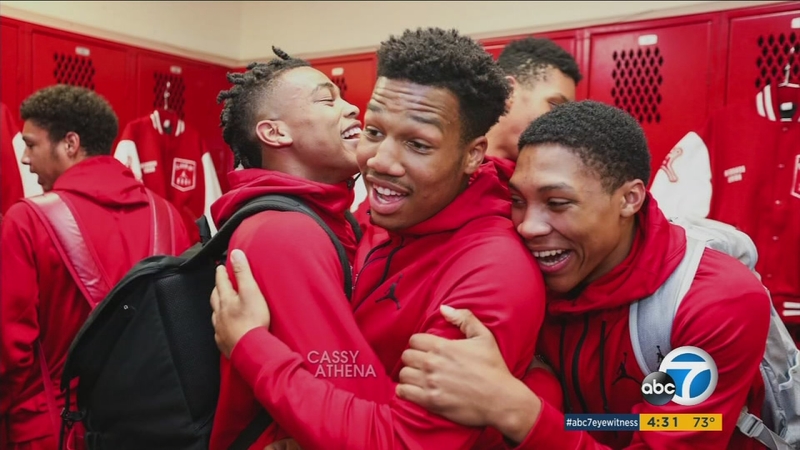 REDONDO BEACH, Calif. (KABC) -- Redondo Union High School students grieved at graduation Friday as they honored classmate Ryse Williams, who died of a rare form of cancer a day before the ceremony.

Williams was a star high school basketball player who signed his letter of intent to play at Loyola Marymount University. Elena Hernandez, his girlfriend of two years, wore a tribute to him on her gown.

"I was one of the last people to see him before he passed," she said.

His coach said Williams only began feeling sick about a month ago with a chest cold that wouldn't go away, so he kept training.

The teen was hospitalized a little more than a week ago. His coach confirmed that doctors diagnosed the star player with renal medullary carcinoma. The extremely rare form of kidney cancer is usually lethal once diagnosed. He died Thursday morning after the aggressive disease reached Stage IV and spread to his lungs and liver.

"Someone who worked out every day and played sports and was athletic, you wouldn't think they have stage four cancer. That's just sad," said former classmate Jorey Nickelberry.

A memorial was set up at his school. All who knew the all-star described Williams as a leader, a role model and a modest individual.

"I know if Ryse was here right now he would tell me, 'You could shed a little tears, but you got to be strong for me,'" said Leland Green, a best friend and teammate of Williams.

A memorial was set up for Williams at Redondo Union High. School officials said his sister accepted his diploma. Hernandez tried to stay strong to honor her boyfriend's memory.