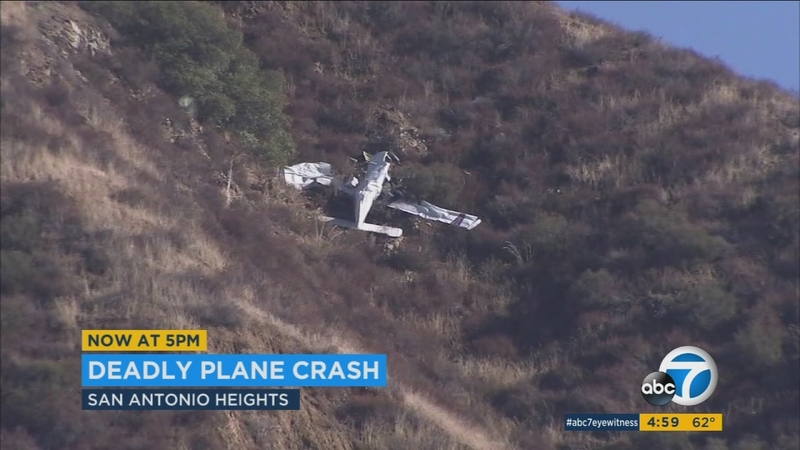 SAN ANTONIO HEIGHTS, Calif. (KABC) -- A man was killed when the small plane he was piloting crashed in the San Antonio Heights area near Mount Baldy, officials confirmed after the aircraft's wreckage was found Tuesday morning.

The Piper PA-28 Cherokee, which departed from Cable Airport in Upland and was en route to Riverside, was reported missing at around 5 a.m., said Ian Gregor, a spokesman for the Federal Aviation Administration.

Airport officials said the propeller plane took off at approximately 4 a.m., when skies were clear. There were no significant weather conditions to speak of at the time.

"I know this gentleman personally, it just doesn't really make sense how this happened," Brent Ray of Alta Loma said.

Although it was dark at the time of the crash, Ray said the pilot knew the area very well.

Both witnesses and law enforcement said weather did not appear to have been a factor.

"He's known for being a safe, proficient pilot, and very experienced," Ray said. "It's very confusing how this could have happened."

According to KNX 1070, the man had been expected to switch planes in Riverside and begin training as a pilot for the station's traffic reporters.

The wreckage was found near Mountain and Euclid avenues at about 6:15 a.m., according to the San Bernardino County Sheriff's Department. The intersection is about one mile east of the San Antonio Dam.

"We haven't gotten any indication whatsoever from Ontario or any other airport saying that there was any emergency announce or any in-flight problems that he came over the radio," said Battalion Chief Doug Nelson of the San Bernardino County Fire Department.

The deceased pilot was not immediately identified. There were no other reported occupants of the plane.

A helicopter team of firefighters and sheriff's deputies responded to the crash site, where authorities said the aircraft was unstable on a hillside. They planned to secure the plane before extracting the man's body.