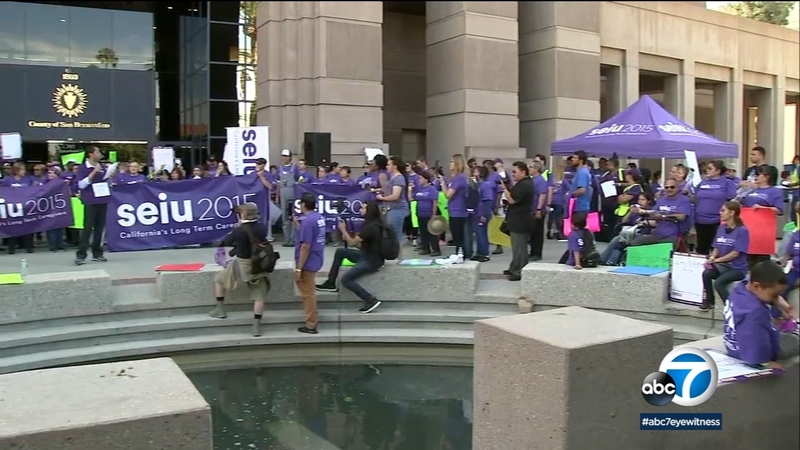 SAN BERNARDINO, Calif. (KABC) -- Caregivers rallied outside the San Bernardino County Administration building Tuesday as the Board of Supervisors considered the budget for the coming year.

They went to urge supervisors to support a new contract that would give them a livable wage and healthcare benefits. Caregivers help their clients bathe, dress, eat and do household chores like shopping.

"Minimum wage is currently $12 an hour. That's not efficient. Also, sometimes as a home care worker, we have to work three to four clients, even to make ends meet," said caregiver Lesia Louro.

The Service Employees International Union 2015, which represents long-term caregivers, helped to stage a protest outside the supervisor meeting. Labor activist Dolores Huerta was on hand to lend her voice and support to care providers.

"We are here today to educate these supervisors," said Huerta. "You have gone years without a wage increase and a majority without health benefits, it is a disgrace."

They argue that the county has not made seniors and people with disabilities a priority and excluded new resources for the In Home Supportive Service Program in the new budget.

"Home care costs four times less than institutional care in California, and it brings millions of dollars in tax revenue to the county of San Bernardino," said April Verrett, president of SEIU 2015.

Besides caregivers, their clients were also at the protest in support of the effort to get better pay and healthcare. Michael Arnott lost his sight five years ago and said he must rely on help to complete his day-to-day activities.

"Without her, I'd be lost," said Arnott.

The County of San Bernardino released this statement in response to the protest:

"Caregivers perform a valuable and vital service for their clients and our community. They deserve dignity and they have our respect. The county is committed to continuing negotiations with the union in good faith and reaching an agreement that is fair to both caregivers and the taxpayers.