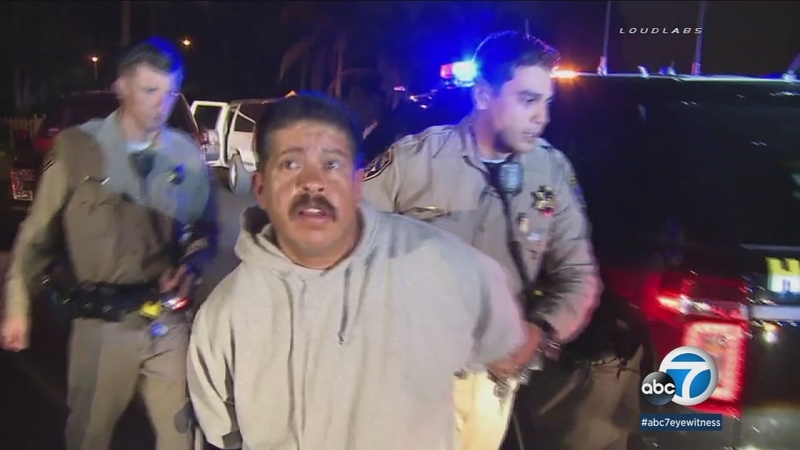 SAN BERNARDINO, Calif. (KABC) -- A man was arrested Friday morning following a police chase from San Bernardino to Paramount after he was caught trying to light a trash bin on fire, which contained a body, authorities said.

The suspect, later identified as 46-year-old Enrique Jimenez, fled the scene and led police on a 65-mile chase to Paramount, authorities said. Jimenez jumped on the 10, 710 and 105 freeways.

The chase was handed over to the California Highway Patrol once the suspect crossed over into Los Angeles County.

"The pursuit involved a vehicle pulling a trailer, a utility trailer, so we had that to contend with. We weren't given a whole lot of information about what went on in San Bernardino, so that's not part of our investigation," CHP Sgt. Carlo Marzocca said.

At some point, the trailer attached to Jimenez's SUV detached. He was ultimately taken into custody around 1:36 a.m. near Orizaba and Golden avenues in Paramount.

"I just want to go see my wife," Jimenez told authorities while in handcuffs. Authorities say two juveniles who jumped out of the SUV during the chase were also taken into police custody. The juveniles are Jimenez's teenage sons, police said.

Once the pursuit ended, authorities returned to the scene in San Bernardino, where they located a body in the trash bin. Detectives believe the victim was murdered at another location.

The victim was identified by authorities as a man in his 40s.

Detectives served a search warrant at the Highland home Jimenez shares with his elderly mother. Family at the home did not want to comment, but neighbors described Jimenez as a decent guy.