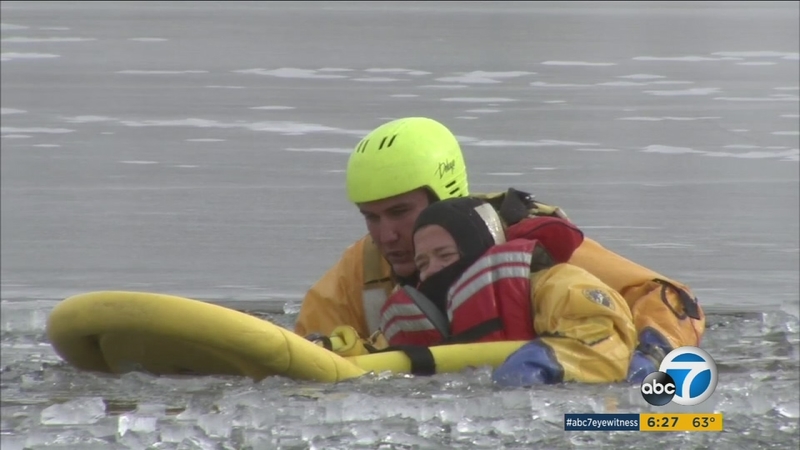 BIG BEAR LAKE, Calif. (KABC) -- A fun day at a frozen lake can turn dangerous if someone falls through the ice. San Bernardino County first responders took part in a special rescue training to prepare for such an event.

Big Bear Lake covered in ice is beautiful but the ice is not as strong as it looks.

During Wednesday's training exercise, first responders learned the dos and don'ts of an ice rescue.

The training is critical especially in Big Bear Lake with its 22 miles of shoreline - much of which is semi-frozen now.

"For us it is an extreme danger because it attracts so many people to it because it is not something they are used to," said Capt. Josh Wilkens with the San Bernardino County Fire Department.

The training was motived by tragedy. In 1990, four rescuers and three children died during a failed ice rescue on Convict Lake in the High Sierra.

There is no such thing as safe ice in Southern California, because the temperature in our local mountains fluctuates day to day.

"We've had warm spells that have weakened the ice day over day," Wilkens said. "Sometimes it'll freeze at night, but it gets weaker every time it gets warm."

During the exercise, rescuers learned techniques they wouldn't normally use such as a reach or throw - something rescuers say should have been used Christmas Day 2012 when a man fell through the ice on Jackson Lake near Wrigthwood.

Several would-be rescuers ended up in the lake trying to save the victim. All eventually got out.

"A lot of times when victims are submerged or in water and they don't know how to swim, it can be a real danger to the rescuer to go out there and perform the rescue," said Anthony Muscarello with the San Bernardino County Fire Department