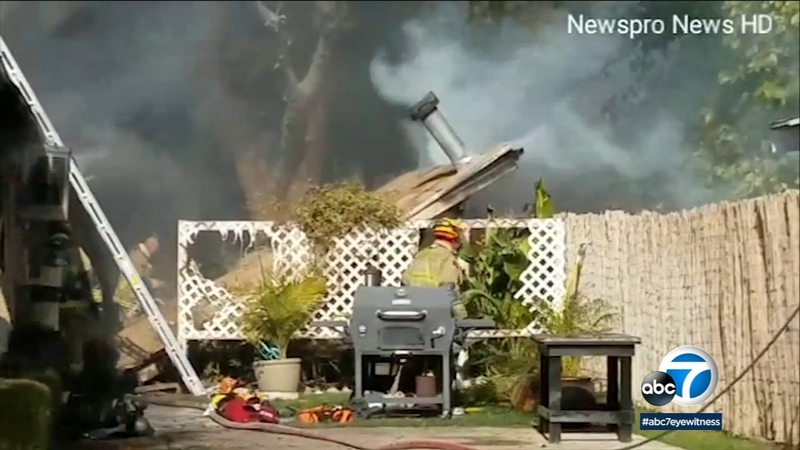 SAN BERNARDINO, Calif. (KABC) -- One person died and three firefighters were injured in a San Bernardino house fire on Saturday.

Authorities said the blaze happened around noon in the 900 block of East 2nd Street. A 4,000 square foot home was engulfed in flames.

Fire crews arrived within six minutes, and upon arrival, they reported heavy fire and smoke coming from three sides of the single-family dwelling.

After reports of people being trapped in the home, firefighters went in for the rescue while still fighting the fire. A victim was found, extricated and transported in critical condition to a local hospital, officials said.

As the fire continued, a secondary search was conducted, and fire crews found a second victim. That victim was pronounced dead within the structure.

The person killed in the fire was not immediately identified, but a family member at the scene said it was a nephew who died.

As the firefight was wrapping up, three firefighters became trapped when a carport collapsed on them. They were rescued and taken to nearby hospitals. One suffered serious injuries, while the other two suffered moderate injuries. All were said to be stable.

Authorities said the collapsed carport was illegally built and made out of heavy timber.

"It did fall on top of them and, you know, the job has an inherent risk, right? And the way that this was constructed and the way that the roofing material was on it, it was hard to see that it was compromised," said San Bernardino County Fire Department Capt. Steve Tracy. "It could have been a lot more tragic event. We're just really happy and fortunate that our firefighters didn't get seriously injured."