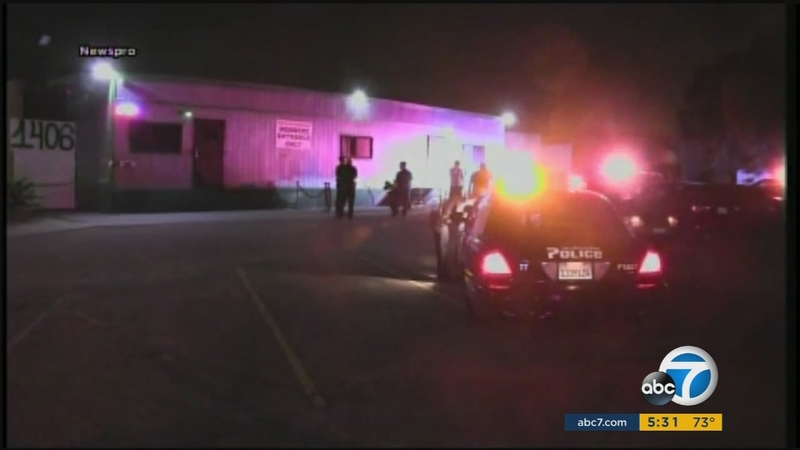 SAN BERNARDINO, Calif. (KABC) -- A security guard is in critical condition after being shot in the face during a robbery at a San Bernardino medical marijuana clinic.

The San Bernardino Police Department received an emergency call on shots fired at a marijuana business in the 1400 block of N. Waterman Avenue shortly before 9 p.m. Thursday.

Three male suspects entered the business, authorities said, and were reported to be armed with handguns. The suspects ordered the occupants to the ground.

At some point, one of the suspects then shot one round at an armed security guard, hitting him in the face. The suspects took cash and marijuana from the business and fled in a gray car with a fourth suspect, police said.

The victim, reported to be a 35-year-old Victorville man, was taken to a hospital in critical condition. The suspects remain at large.

As investigators try to determine exactly what happened, they said they will be taking a close look at the footage from security cameras inside the business.

Police said the marijuana business prior to the shooting was on their radar and under investigation.

"It is illegal to run a marijuana dispensary in the city of San Bernardino, but like any other business, it is a civil process that we have to go through in order to shut that down," said Sgt. Vicki Cervantes of the San Bernardino Police Department.

Meanwhile, the marijuana dispensary across the street did not want to comment on the shooting, but the armed guard outside said security has been stepped up.

"It happens in banks, it happens in grocery stores," said guard Brandon Richardson. "I mean, you can have an aluminum can recycling place and if they know you have cash on hand, you run the risk of getting killed in San Bernardino."